Replacing a crook for another crook 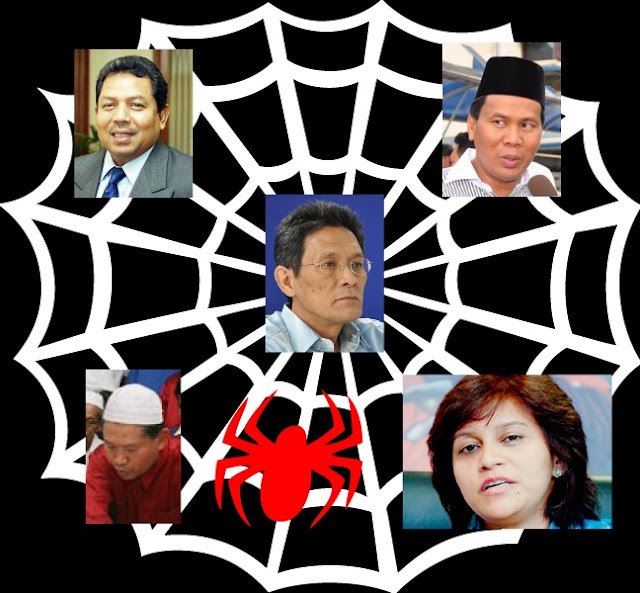 To turn up the heat, I need to bring the spotlight onto a new player. Not a person or an individual but a sub division or rather a committee. The Skim Jejak Jaya Bumiputera (SJJB) is a sub division of the Ministry of Finance of Malaysia. It was first established in 2007. The idea of forming SJJB came from Y.A.B. Dato’ Haji Seri Mohd Najib Bin Tun Haji Abdul Razak the Deputy Prime Minister back then. Y.A.B. Dato’ Seri Haji Mohd Najib Bin Tun Haji Abdul Razak was also the first Chairman for the SJJB until now. Its objective is to assist Bumiputera companies to be listed in the Bursa Malaysia.It is also THE COMMITTEE TO INITIATE ALL MAJOR GOVERNMENT CONTRACT AWARDS as informed by a trustworthy source.

It is well known that Senator Dato’ Dr. Awang Adek Hussin is Deputy Finance Minister. It is also well known that he is the UMNO Chief of Bachok and an UMNO High Council Member. All this is very well known fact known by the general public. But few are aware that SENATOR DATO’ DR. AWANG ADEK HUSSIN IS ALSO THE CHAIRMAN OF THE SJJB WORKING COMMITTEE (I believe it was since he was appointed as Deputy Minister of Finance in 2009),WHOM HAPPENS TO CHAIR ALL MAJOR GOVERNMENT CONTRACT AWARD MEETINGS AS THE WORKING COMMITTEE CHAIRMAN OF SJJB.

Previously Senator Dato Dr Awang Adek Hussin has mentioned that as a Deputy Finance Minister he has nothing to do with project award (here). That statement is only the “HALF TRUTH”. AS THE CHAIRMAN OF THE SJJB WORKING COMMITTEE, HE HAS ALL THE RIGHT TO INNITIATES AND MAKES “RECOMMENDATIONS” ON ANY MAJOR GOVERNMENT CONTRACT AWARDS. That is the other “HALF TRUTH”. He has everything to do with the Johor Bahru Sentral project award. Otherwise why would he make a site visit to Bangunan Sultan Iskandar and Johor Bahru Sentral on 02/12/2010 as I’ve stated previously (here). Although in the official Media Statement only stated that reason being for his site visit is to monitor the progress of the Medium Term Link to Bangunan Sultan Iskandar (this is yet another exposé in the writing), the chronology of events that follows suit after his site visit is highly questionable.