THE LAST OF THE RUBBER TAPPERS?

In 2008, Pak Man (not his real name), a rubber tapper from Kedah was earning MYR4000 a month—a comfortable living. Today, he earns five times less—MYR800 a month.
The sole breadwinner for a family of nine children, Pak Man is struggling to eke out a living on his 3-acre lot of rubber. On a good day, he can get up to 40 kilos of latex; nowadays in the dry season of January to April, he averages about 15 kilos.
In 2008, a kilo of latex was sold for about MYR7, depending on world rubber prices. Today, Pak Man is selling at MYR1.80 per kilo, almost four times less. Responding to global markets, the price of rubber is volatile—causing large fluctuations in Pak Man’s income.
At the same time, Pak Man says that costs have gone up by more than 50%, in part due to GST. Maintaining rubber trees is no easy task—each of the 700 trees on the lot must have pesticide applied, fertilized, and treated if there are termites. Below is a comparison of prices from 2013 to 2018:
Pesticides (2 barrels per application, 3 times a year): 2013—MYR35 per barrel/ 2018—MYR55 per barrel
Fertilizer (12 bags per application, 3 times a year): 2013—MYR70 per bag/ 2018—MYR105 per bag
As he explains the rising costs one by one, Pak Man sounds increasingly resigned.
“My costs have gone up while my income has gone down. I have to work on others’ rubber estates to earn money on the side.”
For those who don’t know, rubber tapping is very labour intensive, requiring Pak Man to start tapping at 7am till 12pm. Paddy farming is quite different. There are generally two harvests a year—in between which farmers are able to take on other odd jobs.
Even government subsidies have dwindled. 5 years ago, the authorities would provide 24 bags of free fertilizer per year; now, only 19 bags are parcelled out.
Furthermore, those who register late are disqualified from receiving aid.
“Life as a rubber tapper is one of uncertainty. Rubber prices can be very volatile—some months we can live comfortably, other times our entire family of 10 has to share one ‘ikan kembung’ (mackerel) for dinner.”
While this year, it was announced that rubber tappers would be given a one-off incentive of MYR600, for Pak Man, it’s too little too late.
“What can I do with that money? It’s not a sustainable solution.”
“The government should step in and do something for us rubber tappers. This issue has been brought to Parliament so many times already—and still, no action.”
“Uneducated people like myself…that’s why we pay taxes so government officers can help us. What have they done for us?”
Despite his self-effacing talk, Pak Man is extremely well-informed. He’s aware of the movement of global commodity prices, government manifestos for the industry, and of the potential of downstream rubber products.
“We could be so much more. I remember reading former Prime Minister Abdullah Badawi’s plan for Malaysia’s rubber industry. More factories, diversification of products, transforming our tappers to more than just raw material providers.”
Pak Man may be the last generation of rubber tappers in Malaysia. At 60-years-old, he is wondering what will happen to his land, passed down from his father and before him his grandfather.
“One day, there will be all these tall and straight rubber trees planted in orderly lines, and not a soul around them.”
“That would be like a ghost story, wouldn’t it?
”

Eulogy for Najib and Rosmah

Eulogy as define in google dictionary is speech or piece of writing that praises someone or something highly, especially a tribute to someone who has just died.

Finding suitable words to praise a criminal is not easy especially when they are Najib and Rosmah. Words after words, stories after stories, cartoon after cartoon, movie after movie, in the end history will do justice with words.

Najib and Rosmah you are responsible for the downfall of UMNO Baru, not the founder Mahathir.  As a Malaysian with dignity and common sense, I do not see the reason why you need to hold on tightly to a party that was never yours in the first place.  Mahathir allowed you to be a member and Chief of his party, you and Rosmah never applied to be a member.  Yet you have the cheek to insult and be rude to the founder. It does not matter that Mahathir has left the party.  History remain the same, Mahathir formed UMNO Baru in 13th February 1988. Today Mahathir can destroy UMNO Baru not you or any Sultan or your father’s spirit can stop that. But is Mahathir destroying his baby?

The one who is destroying UMNO Baru is YOU. You and Rosmah are the greediest bastards in the whole world. You destroyed your father’s legacy. You destroyed your own family by teaching your children and family members to be thieves. You teach the people to hate Islam and the Malay race by destroying and teaching the Judiciary, Parliament Speakers, Ministers MACC, PDRM, Armed Forces, AG, Government Servants and Sultans to be thieves and murderers.

Najib and Rosmah, both deserve to be punished not in cement drum but similar fashion as Teoh Beng Hock and Kugan.

Malaysians should learn never to let a person brought up with a silver spoon to lead this nation every again.

Karma has taught Mahathir a bitter lesson and let us Malaysians be united as one to teach Najib and Rosmah what crime can do to them.

What excuse will ROS Bitch ditch out?

IF OPPOSITION PARTIES WERE TO WRITE SUCH MEMO, FIRE FROM RED HELL WILL POUR.
at April 20, 2018 No comments:

Which is worst - Ungrateful or Rude?

Rosmah Mansor took a stroll down memory lane this afternoon, recalling how she had known PKR vice-president Nurul Izzah when the latter was still a child with no teeth.
The wife of caretaker prime minister Najib Abdul Razak said she felt upset when the 37-year-old lawmaker addresses her by name, instead of her honorific title Datin Seri, aunty or makcik. 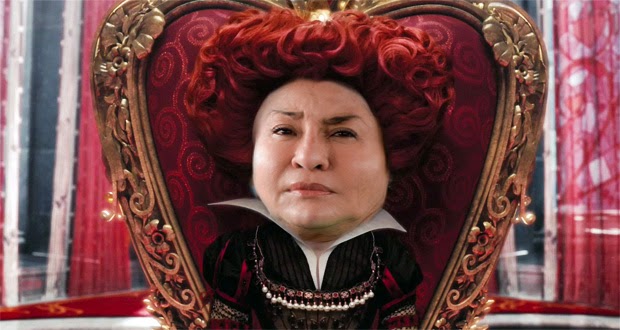 Dear All, what do you think when a person who was brought up by a father single-handed, refused to attend his funeral?
What do you think of a woman who refused to allowed her own mother to stay together with her biological father?
What is wrong when a person addresses another by the person's name?
No need to get upset over a petty issue, when one does not have the dignity to hold a title or position.
http://barkingmagpie.blogspot.my/2009/06/betrayed-by-her-adopted-brother.html

I am never surprise by the action and words of any Royal Household simply because I HAVE NEVER SEEN OR HEARD OF SITTING ROYALTY BEING POOR OR HAVE GIVEN THEIR WEALTH TO ITS OWN PEOPLE.

63 years of living and day by day I can see for myself how these French fry are being brought up and lived.  People who have never worked or suffered from not having any food to eat or have a bath or place to sleep are no ordinary human beings.  These people are not living beings, in plain English these are lucky bums that God has forgotten he had created.

SINCE GOD ALREADY KNOWS MY PLAN,

GOD THINKS BEING HUMAN BEING IS THE RIGHT GIFT FOR ME.

The End of Barisan Nasional

What goes around
Must come home
The time is here for all to take charge
The legacy of the most corrupted is at the end
Destiny or Fate is here
We shall witness A NEW BEGINNING
NAJIB WILL BE ENDING HIS CAREER AS THE MOST HATED PRIME MINISTER OF MALAYSIA BY CALLING FOR GENERAL ELECTION 14 ON THE 4TH MAY 2018.
HIDUP MALAYSIA
HIDUP RAKYAT
at April 02, 2018 No comments: