STOP PRETENDING ALL IS WELL: Pakatan can march forward BUT NOT with a Hadi-led Pas

During the muktamar in Batu Pahat, PAS president, Abdul Hadi Awang declared that PAS would continue to stay with Pakatan.
However, the question of whether the other two Pakatan component parties can any longer trust Hadi is something that is yet to be seen.
Already both PKR and DAP top leaders, Anwar Ibrahim and Lim Kit Siang were absent from the Pengkalan Kubor by-election. This may be the signal that the damage is already done by Hadi’s veto.
In the Pakatan circle, Hadi is partially blamed for prolonging the Menteri Besar fiasco.
Had he stood by the Pakatan decision to support and nominate PKR President, Dr Wan Azizah Wan Ismail to be the Menteri Besar, the crisis would not have dragged that long.

The unanimous position taken by Pakatan Rakyat would have given the Sultan no leeway on who to pick as Menteri Besar, since the State Constitution is clear that the MB would have to be one who has the confidence of the majority in the state assembly.
By submitting his own list of candidates for the Selangor MB, Hadi was not only going against the decision made by his party’s central committee, leaving the top leaders in PAS red-faced, but also the decision made by the other partners in Pakatan.
Under-handed, not just undemocratic
It was such under-handed & undemocratic actions by one man who has driven the wedge further into the crack within Pakatan. Although others within PAS were trying to do damage control by suggesting that the veto power their party president had used was on only very rare occasions, Hadi’s own record as a politician is also not very convincing.

He had openly criticized Dr Wan Azizah’s performance as a parliamentarian between 1999 and 2008. As pointed out by Bukit Lanjan State Assemblyperson, Elizabeth Wong, the volumes of the Hansard during that period showed otherwise. That alone has dented Hadi’s own credibility as the Islamist party’s chief.

PAS’ victory in both Terengganu (in 1999) and Kedah (in 2008) in the past had been shortlived. Hadi himself had been the Menteri Besar of Terengganu for only one term, after the Malay protest votes shifted to Barisan Alternatif (comprising Keadilan, DAP and PAS) following the imprisonment of Anwar in 1998.
Both States have not seen a return to the Opposition after they were taken back by Barisan Nasional.
When the Barisan Alternatif hit the rocks following the departure of the DAP, PAS under Hadi’s leadership lost Terengganu in 2004, winning only seven parliamentary seats that year. This was only a quarter of what the party had won in 1999. Even Hadi was knocked off from his own parliamentary seat.
The “feel good” factor that Barisan Alternatif carried had vanished into thin air by 2004. In that year, PAS nearly lost the state of Kelantan, with a very slim majority of only 23 out of 45 seats, after it lost in the Pengkalin Pasir by-election in 2005.
Realising that PAS could no longer go alone, Hadi decided that PAS would remain with Pakatan, but it does not necessarily mean that both PKR and DAP would welcome PAS warmly into its fold again, especially after being “vetoed” against by Hadi in the Selangor MB fiasco.
It has appeared that even PKR supremo, Anwar Ibrahim did not have as powerful veto as Hadi, despite having the backing of two component parties.
Now that Hadi’s character has come under the spotlight, it may mean that the non-Malays may not vote for Pakatan Rakyat, in the constituencies where it is represented by a PAS candidate.
The Non-Ulama Faction
Question is: Would the non-ulama faction in PAS be better off if they break ranks with Hadi and either form their own party or leave PAS to join the other component parties? This is unlikely to happen, but such a decision will not get PAS very far either with the current political landscape. 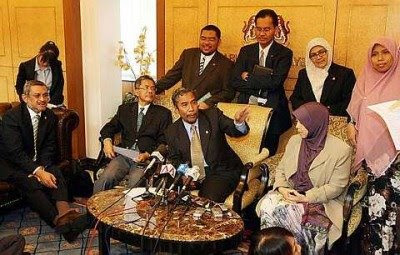 Pakatan, with PAS and Hadi, may not enjoy the same support that it was getting during the past two General Elections. It is PAS that needs Pakatan more, as without PAS, Pakatan can still court new partners in East Malaysia, which could prove to be more strategic for its bid to take over Putrajaya by GE14.


Given the choice, the Pakatan partners would find it much easier to work with leaders such as Mat Sabu and Khalid Samad, who are more rational and predictable, and others like the principled duo, Hulu Klang state assemblyman, Saari Sungib and Morib assemblyman, Hasnul Baharuddin, who are now respected highly within the Pakatan circle after they were willing to stick their necks out for what they believed to be the right thing to do in order to solve the MB impasse.
Despite being called a ‘barua’ (lackey) by Hadi, both Saari and Hasnul have decided to stay on with PAS. Saari, in one of his famous statements, said he would remain a PAS member for life; however, his survival within the party will largely depend on the decisions made by the disciplinary committee. As it is, there are already a lot of insults hurled against him, but he remained a gentleman, by expressing his respect for Hadi.
How would Malay moderates vote in GE14 - Pas or Pakatan?
It would be interesting if we have the answers whether these PAS members, despite their memberships, will still vote for PAS in a three-corner fight, realizing that their main enemy is still UMNO?