Parti Sosialis Malaysia (PSM) is simply dumbfounded why its member, activist Khalid Mohd Ismath, has been denied bail.
Khalid has been slapped with 14 charges - 11 under the Communications and Multimedia Act and three charges under the Sedition Act - for his Facebook posts on the Johor royalty.
Former PSM secretary-general S Arutchelvan pointed out how cartoonist Zulkiflee Anwar Haque, who is better known as Zunar, has been slapped with nine sedition charges but was still granted bail.
“(Also), the protesters during the Perak constitutional crisis physically stopped the sultan’s car, but they too were given bail,” Arutchelvan (photo) told Malaysiakini last night.

Khalid's postings were made on the ‘Solidariti untuk peguam Kamal Hisham Jaafar’ page on Facebook.
Khalid’s lawyer Dinesh Muthal said that the activist was denied bail on grounds that he may flee the country.
Arutchelvan pointed out that Khalid in his posts did not mention the sultan in any way.
“Khalid’s case is something very mild. He never, at any point, mentioned the sultan.”
The PSM leader is also of the view that the 11 charges under the Communications and Multimedia Act could be simply put under one charge.
“It shows how the prosecution is malicious in this manner. They want to prevent people like Khalid from further posting on issues of concern. But isn’t it supposed to be that you are innocent until proven guilty?”
Before Khalid, blogger Ali Abd Jalil, 29, was also accused of criticising the Johor royalty, and he later fled to Sweden.
Informing Malaysiakini on the details of the various charges made against Khalid, Arutchelvan expressed hope that Malaysians would see the charges and “laugh about them”.
Below are some of Khalid's Facebook postings.
Oct 5 post:
Jijik dan najisnya bila tengok ade akaun-akaun FB palsu yg mungkin dibayar berhala utk burukkan dan menyerang Kamal Hisham.
Betapa bimbangnya pembodek-pembodek ini apabila kita berbicara soal Kamal Hisham.
Kamal boleh dipenjara, namun tidak akan hilang semangatnya hingga bila-bila.
Ini zaman moden, bukan zaman berhala.
Perdana Menteri pun boleh dijatuhkan dengan kuasa rakyat, apatah lagi menjatuhkan berhala.
Berhala bukan Tuhan.
(It’s disgusting looking at these fake FB accounts which are probably paid for by the idol to attack Kamal Hisham, how worried these bootlickers are when we talk about Kamal.
(He can be imprisoned but he will not lose his spirit. This is the modern age, not the time of idolatry. If the prime minister can be toppled by the people’s power, what more to topple down an idol. An idol is not God).
Oct 4 post:
Team solidariti Kamal Hisham Jaafar akan bermesyuarat minggu ini bagi mencari solusi pembelaan ke atas Kamal.
Kita akan cuba beri tekanan di peringkat nasional dan antarabangsa.
Tidak ada kesalahanya yang tidak boleh diikat jamin.
Sedangkan pembunuh pun boleh diikat jamin (kes Altantuya), inikan pula yang tidak melibatkan nyawa manusia.

Jaga-jaga mu berhala.
(The Kamal Hisham Jaafar solidarity team will have a meeting this week to find solutions for Kamal’s defence. We will try to put pressure nationally and internationally. There is no crime for which the person responsible cannot be bailed out. Even murderers can get bail (as in the Altantuya case), what more a case that does not involve lives. Beware, you idols).
Sept 28 post:
Teman-teman seperjuangan,
Kamal Hisham masih didalam tahanan. Tiada siapa tahu bagaimana keadaan beliau didalam.
Kita maklum bahawa, Kamal sangat digeruni oleh segolongan berhala di Johor.
Kita akan terus pantau keadaan Kamal yg masih belum dibebaskan selepas hampir sebulan didalam tahanan tanpa dibuktikan bersalah.
Sebarkan cerita pasal Kamal melawan berhala dan wujudkan tekanan.
(Kamal Hisham is still being detained. No one knows how he is faring inside. We know how he is feared by a couple of idols in Johor. We will continue monitoring his condition. Kamal is yet to be released after almost a month in detention.
Spread the story on Kamal, who is fighting against the idols, and create pressure).
Khalid repeatedly mentions ‘berhala’ or idols in his posts, but it is not clear as to who he was referring to.
For the above Facebook posts, Khalid was charged under the Communications and Multimedia Act, for which he faces a fine of not more than RM50,000 or a jail term of not more than a year, or both, if convicted.
**************************************************** 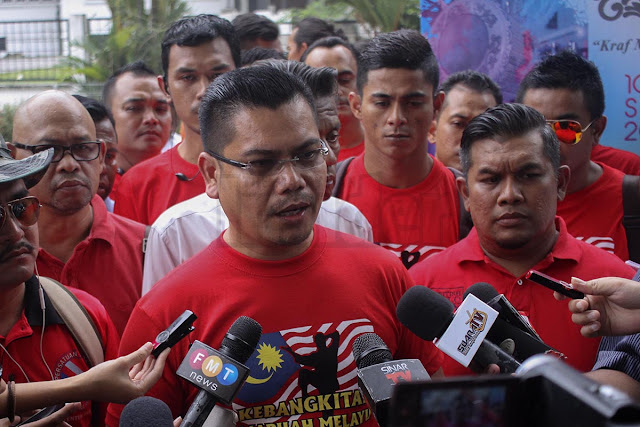