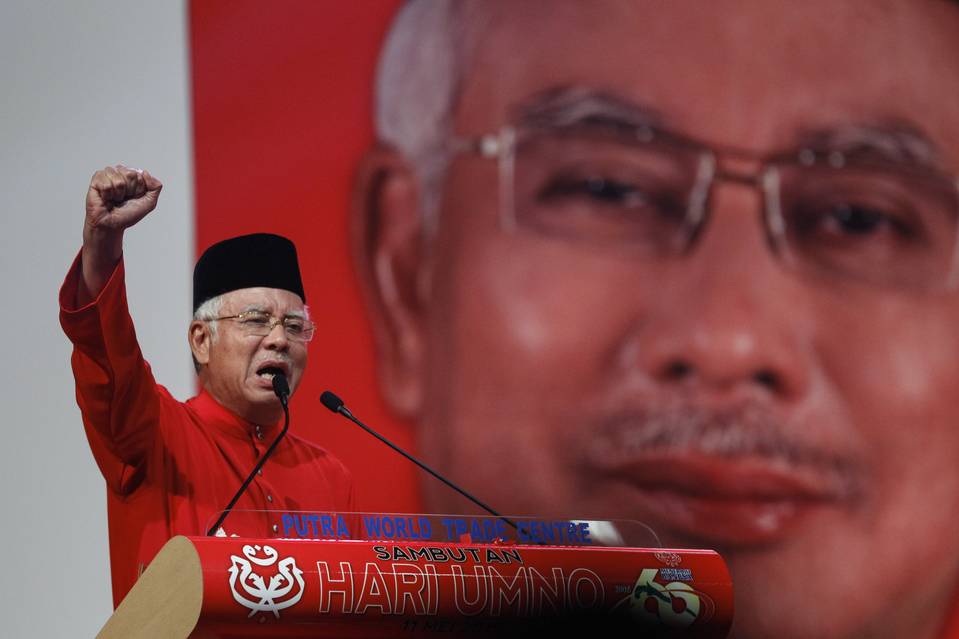 KUALA LUMPUR, Malaysia—Malaysian investigators scrutinizing a controversial government investment fund have traced nearly $700 million of deposits into what they believe are the personal bank accounts of Malaysia’s prime minister, Najib Razak,according to documents from a government probe.
The investigation documents mark the first time Mr. Najib has been directly connected to the probes into state investment fund 1Malaysia Development Bhd., or 1MDB.
Mr. Najib, who founded 1MDB and heads its board of advisors, has been under growing political pressure over the fund, which amassed $11 billion in debt it is struggling to repay.
The government probe documents what investigators believe to be the movement of cash among government agencies, banks and companies linked to 1MDB before it ended up in Mr. Najib’s personal accounts. Documents reviewed by The Wall Street Journal include bank transfer forms and flow charts put together by government investigators that reflect their understanding of the path of the cash.
The original source of the money is unclear and the government investigation doesn’t detail what happened to the money that went into Mr. Najib’s personal accounts.
“The prime minister has not taken any funds for personal use,” said a Malaysian government spokesman. “The prime minister’s political opponents, unwilling to accept his record or the facts, continue to try to undermine him with baseless smears and rumours for pure political gain.” 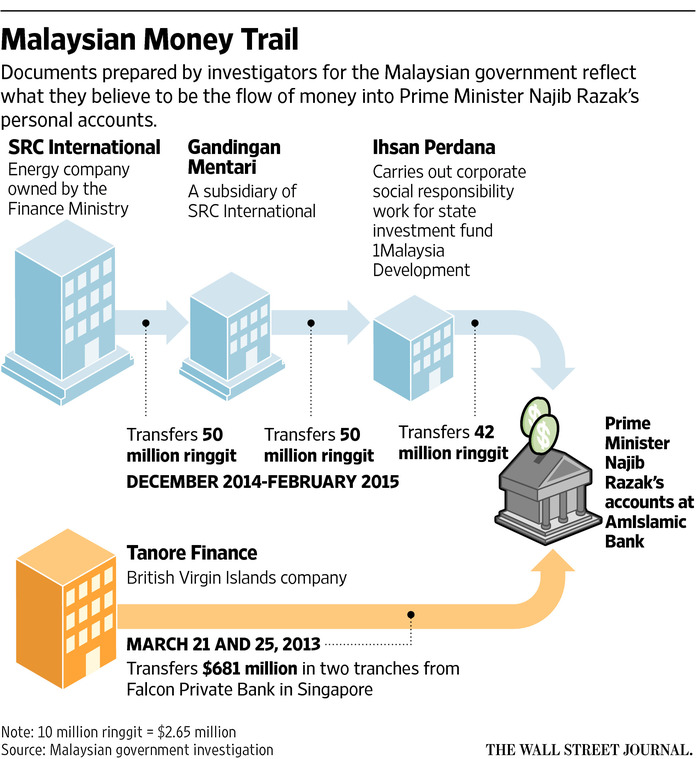 ENLARGE
Mr. Najib has previously denied wrongdoing in relation to 1MDB and has urged critics to wait for the conclusion of four official investigations that are ongoing into 1MDB’s activities.
Investigators have identified five separate deposits into Mr. Najib’s accounts that came from two sources, according to the documents viewed by the Journal.
By far the largest transactions were two deposits of $620 million and $61 million in March 2013, during a heated election campaign in Malaysia, the documents show. The cash came from a company registered in the British Virgin Islands via a Swiss bank owned by an Abu Dhabi state fund. The fund, International Petroleum Investment Co., or IPIC, has guaranteed billions of dollars of 1MDB’s bonds and in May injected $1 billion in capital into the fund to help meet looming debt repayments. A spokeswoman for IPIC couldn’t be reached for comment. The British Virgin Islands company, Tanore Finance Corp., couldn’t be reached.
Another set of transfers, totaling 42 million ringgit ($11.1 million), originated within the Malaysian government, according to the investigation. Investigators believe the money came from an entity known as SRC International Sdn. Bhd., an energy company that originally was controlled by 1MDB but was transferred to the Finance Ministry in 2012. Mr. Najib is also the finance minister.
The money moved through another company owned by SRC International and then to a company that works exclusively for 1MDB, and finally to Mr. Najib’s personal accounts in three separate deposits, the government documents show.
Nik Faisal Ariff Kamil, a director of SRC International, declined to comment. Mr. Kamil had power of attorney over Mr. Najib’s accounts, according to documents that were part of the government investigation.
A 1MDB spokesman said, referring to the transfers into Mr. Najib’s account: “1MDB is not aware of any such transactions, nor has it seen any documents to this effect.” The spokesman cautioned that doctored documents have been used in the past to discredit 1MDB and the government.
For months, concerns about 1MDB’s debt and lack of transparency have dominated political discussion in Malaysia, a close ally of the U.S. and a counterweight to China in Southeast Asia.
When he founded 1MDB in 2009, Mr. Najib promised it would kick-start new industries and turn Kuala Lumpur into a global financial center. Instead, the fund bought power plants overseas and invested in energy joint ventures that failed to get off the ground. The fund this year has rescheduled debt payments.
The Journal last month detailed how 1MDB had been used to indirectly help Mr. Najib’s election campaign in 2013. The fund appeared to overpay for a power plant from a Malaysian company. The company then donated money to a Najib-linked charity that made donations, including to local schools, which Mr. Najib was able to tout as he campaigned.
“We only acquire assets when we are convinced that they represent long-term value, and to suggest that any of our acquisitions were driven by political considerations is simply false,” 1MDB said last month.
The four probes into 1MDB are being conducted by the nation’s central bank, a parliamentary committee, the auditor general and police. A spokeswoman for Bank Negara Malaysia, the central bank, declined to comment. Malaysia’s police chief and a member of the parliamentary committee also had no comment. The auditor general said this week it had completed an interim report on 1MDB’s accounts and would hand it to the parliament on July 9.
The prime minister is facing increasing pressure over 1MDB. The country’s longest-serving prime minister, Mahathir Mohamad, who left office in 2003, publicly has urged Mr. Najib to resign.
This week, Malaysia’s home minister threatened to withdraw publishing licenses from a local media group, citing what he said were inaccurate reports on 1MDB.
The $11.1 million of transfers to Mr. Najib’s bank account occurred at the end of 2014 and the beginning of 2015, according to the government investigation. Among the companies that investigators say it passed through was Ihsan Perdana Sdn. Bhd., which provides corporate social responsibility programs for 1MDB’s charitable foundation, according to company registration documents. Attempts to reach the managing director of Ihsan Perdana weren’t successful.
Documents tied to the transfer said its purpose was for “CSR,” or corporate social responsibility, programs. The Wall Street Journal examination of the use of funds tied to 1MDB for Mr. Najib’s election campaign showed that the money was slated to be used for corporate social responsibility programs as well.
The government probe documents detail how investigators believe SRC International transferred 40 million ringgit on Dec. 24 last year to a wholly owned subsidiary. This company on the same day wired the money to Ihsan Perdana, according to the documents. Two days after receiving the money, Ihsan Perdana wired 27 million ringgit and five million ringgit in two separate transfers to two different bank accounts owned by Mr. Najib, the government documents show.
In February, 10 million ringgit entered the prime minister’s account, also from SRC International via Ihsan Perdana, the documents show.
The remittance documents don’t name Mr. Najib as the beneficiary but detail account numbers at a branch of AmIslamic Bank Bhd. in Kuala Lumpur. Two flow charts from the government investigation name the owner of these accounts as “Dato’ Sri Mohd Najib Bin Hj Abd Razak,” the prime minister’s official name. A spokesman for AmIslamic Bank declined to comment.
In another transaction, Tanore Finance, the British Virgin Islands-based company, transferred $681 million in two tranches to a different account at another Kuala Lumpur branch of AmIslamic Bank. The government probe said the account was owned by Mr. Najib, according to the documents.
The transfers came from an account held by Tanore Finance at a Singapore branch of Falcon Private Bank, a Swiss bank which is owned by IPIC, the Abu Dhabi fund, according to the documents. A spokesman for Falcon Private Bank declined to comment.
The $681 million was transferred to Mr. Najib’s accounts on March 21 and March 25, 2013, the government documents show.
Write to Tom Wright at tom.wright@wsj.com and Simon Clark at simon.clark@wsj.com

"a total of US$681,999,976 (RM2.6 billion) was separately wire transferred from the Singapore branch of the Swiss Falcon private bank owned by the Abu Dhabi fund Aabar into the Prime Minister’s private AmBank account in Kuala Lumpur, on March 2013"

Why not contact the Monetary Authority of Singapore and Commercial Affairs Department Singapore to conduct investigations on the USD681 million transfer from Falcon Private Bank, Singapore Branch...

" Reporting - The public and CAD need to work together to control crimes and maintain Singapore as a reportingchoice destination for businesses and investment.

If you suspect that an individual or company has committed an offence of a commercial nature or has contravened legislations enforced by the Department, you can lodge a report on commercial crime.

If you move physical currency and bearer negotiable instruments exceeding SGD 30,000 into or out of Singapore, through cargo, post or other means, you are required to give a NP728 report to STRO..."