Warning to PKR and DAP 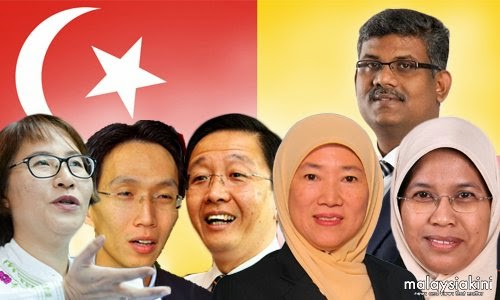 Pakatan Rakyat state assemblymen today asked the federal government not to twist facts and rightly pointed out that Kinrara-Damansara Expressway (Kidex Skyway) does not solve traffic problems as advertised.
But these assemblymen are also guilty of cherry-picking facts and still have not answered my earlier question to them. Is it a “yes” or “no” to Kidex Skyway from them and the Selangor government?
If they think the PR government is not equally culpable, let me remind you how this whole Kidex thing started.
The federal government proposed the Kidex Skyway to the Selangor government sometime in 2011. The Selangor state government gave interim approval through the Selangor Economic Action Council (MTES) in February 2012.
MTES is chaired by the menteri besar with several state exco members in attendance, meaning the approval for Kidex Skyway was not Tan Sri Abdul Khalid Ibrahim’s alone.
I wanted to know which one of you Selangor excos were in that meeting too, but you protected yourselves by not answering the request for the list of attendees when a PJ resident asked officially
under the Freedom of Information Enactment 2012.
Fast forward to May 2014 when the rakyat were told “There are no documents on the Kidex Skyway”. What were the MB and state excos deliberating on in 2012 then?
Your own meeting minutes confirmed that the Malaysian Highway Authority (LLM) gave a presentation at that meeting. So was the Selangor state government convinced that the Kidex Skyway and five other highways were so essential to the future development of Selangor based on an LLM slide presentation alone?
It must have been some presentation indeed. Since you won’t reveal who was really at that meeting, I’m inclined to imagine that the “Bomoh 1Malaysia” was there doing a coconut chant for all of you as well!
Better yet, two years down the road since the approval was given, the Selangor government still says “Kidex can go ahead if they meet all conditions”.
Should Kidex Skyway meet all conditions first before approval is given? Pakatan Rakyat talks about good governance so much that they can’t even get this process right.
I would like to remind Mohamed Azmin Ali that, prior to him becoming the new Selangor MB, he rightly said that the Kidex approval was akin to “the cart before the horse”.
Where do we, the rakyat stand? Where does the Selangor govrenment stand with your election promise as stated in your 2013 GE13 manifesto?
No toll and no to crony projects. That “demi rakyat” platform seems like all talk only for the votes in an effort to get to Putrajaya.
I dare say if the Kidex Skyway gets built, Pakatan Rakyat will lose the next election and never again govern in Selangor as the rakyat will never forgive Pakatan Rakyat.
Every time we see the pillars of Kidex Skyway, we will see how close we were to stopping the project through the PR Selangor government and we will be reminded that Pakatan Rakyat did not stand by the rakyat!
And please don’t push the blame to Barisan Nasional. The Pakatan Rakyat government in Selangor gave the approval in February 2012 and then published a Land Acquisition Gazette in June 2013 while the BN government only signed the concession agreement in Nov 2013. You sold us out to BN first by signing the order to acquire our homes, so don’t go saying that it is a federal government project that you cannot stop Kidex Skyway!
We the rakyat voted for you to retain Selangor. Show us how you stand together with the rakyat to defend our homes, business and buildings against Kidex. Walk the talk or we will walk you out of Selangor. – November 8, 2014.