What's happened in China can happen in Malaysia

A man has been killed after his still beating heart was pulled out of his chest and bit into by his attacker after a furious row over a bowl of noodles.
Yul Liao was savagely attacked following an argument with Bo Tuan, 29, who wanted to share his noodles.
When the 48-year-old victim refused, they started shouting at each other before Bo pulled out a knife and drew it across the other man's throat.
An eyewitness said: "It was bloody and horrifying and I can't get the images out of my mind.
"He sliced the man open like he was a bag of rice, and pulled his heart out in front of us all, I swear it was still beating. Several people fainted, I wish I could have fainted. I can't stop seeing it even when I close my eyes."
She said that the man had carried the heart in his hands occasionally biting and made no attempt to run away as he wandered around the small pavement area near where the man's dead body lay on the ground.
When police arrived on the scene in Suizhou, in China's Hubei province, Bo did not resist arrest.
Locals said they wanted more police protection in the area to prevent similar violent incidents.
They said that officers had taken 40 minutes to turn up and the man could have attacked anybody else walking past in that time. 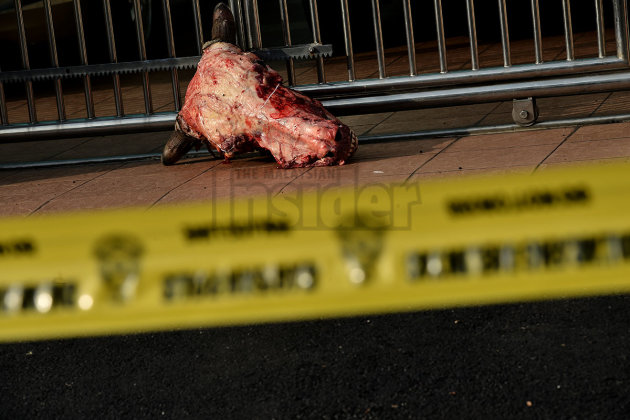 THERE IS NO DIFFERENCES IN CULTURE WHEN HATRED IS SUPPORTED BY THE RULING GOVERNMENT OF MALAYSIA.
TO THIS WE HAVE TO GIVE THANKS TO TUN RAZAK.
WHAT HAS MALAYSIA DONE TO DESERVE SUCH A  SON?