Taking a taxi from KLIA2 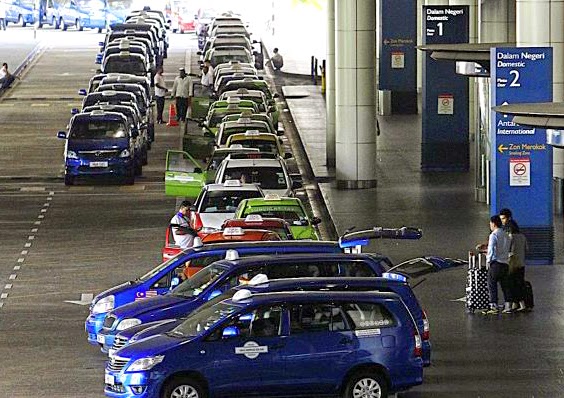 Whenever I arrive at an airport, taking a taxi is pretty straight forward.
Go to the counter, buy ticket, take taxi.
Since the opening of klia2 which is branded as the budget airline terminal
for Malaysia, there has been some talk about the taxi service offered here.
While most unsuspecting travellers may not even know they have been duped, some frequent travellers like me will always take note of these kind of things.

Overall, travellers should know that there are generally 3 types of taxi services being offered when taking a taxi from klia2. The fourth type are taxi touts.

You must read this as it is highly important for all travellers coming into Malaysia via
any budget airlines.

Note that a 50% fare surcharge is applicable from 11.30pm till 6am.
Taxis are multi-coloured in Malaysia. The colours depict the taxi companies.
Types of common taxis found around Malaysia:        KLIA2 Taxi Services        Budget Taxis

1.    KLIA2 Budget Taxi -
This means, you pay a fixed fee when you tell the counter where you are going. You get a coupon, go outside, line up and wait your turn. When the red collared taxi arrives, you give him the coupon, and he tears his portion
and gives you back half. You then tell him your destination. If you tell the counter you are headed to Bukit Bintang and then tell the taxi man
somewhere else, he can refuse you.Or he can add on an additional charge from what you originally paid. So you must tell him the same destination you told the counter as it is printed in the coupon.

This is a straight forward system practiced almost all over the world.
Note: During peak hours or rain, there can be a long wait for these taxis.
2.       KLIA2 Metered Taxi - This was recently introduced where you buy a coupon
for RM2.00, then go to another line and take a 'metered taxi'. This means the taxi will start his meter to wherever your destination is. The taxi driver MUST run his meter when you board the cab.

If you ask me, I prefer this as it saves me about RM10 to RM15. So it is the cheaper way, depending on your destination too. In total, you need to pay the meter fare and toll charges. No two ways about it.
Note: Sometimes, you have to wait a little longer for these taxis. Most of the taxis are the new '1Malaysia Taxis'.
KLIA2 Premier Taxis

3.    KLIA2 Premier Taxi - This are the 'Blue' taxis which are more expensive compared to the budget ones. They cost anywhere around double of the normal price.

The taxis are slightly bigger than the common ones but if you are getting your transport claimed by your company, then by all means, use this.
Note: These taxis are aplenty and always available.
4.    Taxi Touts - These is the last category and most crooked ones therefore they operate in plain clothes or some of them even wear a smart suit approaching passengers. The ones in suits are usually agents dressed to impress. Some of them even have name tags. They casually approach foreigners who look lost and offer taxi services at double or triple the prices.

Just note that when you require a taxi, you need to get it from the official taxi counters.
KLIA2 Taxi Counter - Note the Red and Blue Taxi SignsBad Kuala Lumpur Taxi Experience
So, here's my little experience with the taxi system. Apparently, there is some hanky-panky going on among the taxi people here. When I went to the 'Metered Taxis' counter, the lady selling the tickets told me that there would be a very long wait as there are no metered taxis there. She urged me to take a 'Blue' taxi or 'Budget' taxi as they are all ready and waiting. Since I was not in a rush, I told her it was ok for me to wait.

But she kept trying to persuade me to take the other taxis. Eventually I said no and would wait it out.
When I went outside to wait, I was instructed to go to an area on the left section after exiting the main doors.

There were 2 people in front of me waiting too. In less than 5 minutes, one taxi came and they boarded it followed by another '1Malaysia Taxi'. so in total, I waited less than 10 minutes.
Inside the taxi, the driver was very polite and hospitable. When I asked him about the metered taxis, his story came about. He told me that there was some politics going on between the budget, premier and metered taxis. Because all this while, the favouritism was given to the KLIA taxis, the group managing this was unhappy that the authorities allowed metered taxis to operate there. so,

all taxis usually wait in a holding area outside the airport and will be called anytime there is a lack of taxis and keep the taxi flow going smoothly.
Taxis waiting at the airport in Malaysia
However, he told me that at many times, he waited in the holding area for 6-8 hours
before he (metered taxi) is even called for a pick up.

It can be frustrating for taxi drivers to wait so long for a fare, but apparently, this is what is going on and really effecting the rice bowl of these taxi drivers.
The budget and premier people seem to be working together to take all the passengers and the taxi coupon counters seem to be in sync with the 'local' syndicate at klia2. SPAD (Unit that plans, regulates and enforces all matters relating to land public transport in Peninsular Malaysia)is well informed about this and recently caught a number of counter people doing such things. However, after a day or two, things seem to go back to the devious ways.

Some of the 'metered taxi' counter staff are working hand-in-hand with the budget and premier taxis to send passengers over.
As for the Budget and Premier Taxis, another scam is when first time foreigners arrive here in Malaysia, they are immediately sold to the premier taxis. Imaging a one way budget fare from klia2 to KL city costs about RM80, these unsuspecting foreigners end up paying about RM160 one way on a premier taxi. That's double the fare! How this works is that the budget taxi counter person will ask the foreigner how many of you.

If there is 2 to 4 people, they will say that there are no budget taxis or they cannot fit into the budget taxis and then convince them to take the premier taxis.
Now klia2 is a bustling airport with thousands of travellers moving in and out on a daily basis. Let’s say there are about an average of 500 taxis going out of klia2 daily, and if a corrupt counter person manages to make a commission of RM10 (US$3) per premier taxi they sell, that works out to be RM5,000 (US$1500) a day!

You can now imagine why the taxi business here can go corrupt.
The new 1Malaysia Taxi
End of the day, we all know that in every country, there is corruption, even in tourism but when you first arrive at the airport and get victimized without knowing? This puts a bad image towards the country. I personally know that SPAD knows what is going on. Even my '1Malaysia Taxi' driver concurred with me on this. His solution, put a couple of SPAD officers stationed at the taxi area, or better still abolish the coupon system or metered system.

Just have two - Budget or Premier.
I do hope someone from the ministry in Malaysia will read this article and something be done about this taxi scam at klia2 before it goes out of hand. After all, we are trying our best to make every visitor happy when visiting Malaysia, especially when this is the Visit Malaysia Year 2014.
at June 24, 2014