Sad when the Authorities are corrupted, this happens

As published in Malay Mail today.

Community leaders criticised the attack on the fourth estate, labelling it as an act of intimidation against the public. 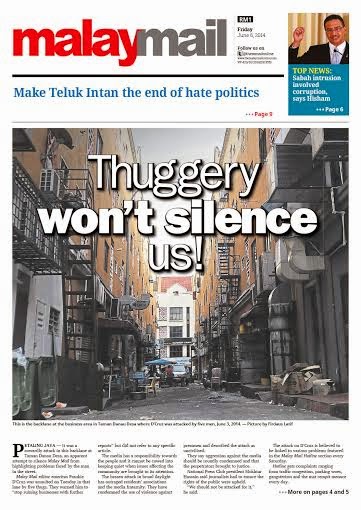 “The attack against Malay Mail should not have occurred as the paper has always been the voice of the people throughout the years,” said Mumtaz.

“We take our grouses to the media because certain quarters do not adhere to rules and guidelines, or when the authorities fail to act.”

He said the attack against the media was also an attack on the community.

“We speak on behalf of the people and if the media is being attacked for highlighting such matters, it can also be viewed as an attack against the people,” he said.

Malay Mail editor emeritus Frankie D’ Cruz, who was on his way to have breakfast in Taman Danau Desa on Tuesday, was rounded up by five men who accused him of ruining the businesses of people in the area.

He was attacked and warned to stop highlighting such matters. He lodged a report at the Brickfields district police station the same day.

“Malay Mail has been correctly highlighting premises that do not abide by the rules,” Chan said.
He said reports by the paper were not targeted at a specific outlet but many outlets which had gone against KL City Hall by-laws.

Bangsar Baru residents’ association president Datuk George Joseph said action should be taken against those who breached the law.

“The authorities should not take this matter lightly as a journalist should not be attacked for highlighting problems affecting the people,” George said.

“I raised issues concerning illegal parking and parking lots being taken up in commercial areas by irresponsible quarters but we worked with City Hall to solve the problem.

“If people are not breaching the law, then they should have nothing to be worried about,” he said.
Section 14 Petaling Jaya resident sassociation chairman Dr Mohan Mahatheva said violence would not solve problems.

“Violence and intimidation are simply unacceptable,” he said.

Section 19 Petaling Jaya residents association chairman Tan Yew Leong said the press wrote for the public and was doing its part to inform the public of woes and grievances experienced by the people.

“The assault was definitely uncalled for and Malay Mail should highlight issues affecting the people without fear or favour,” Tan said.

We just want to do our jobs

BEATING up an editor because his newspaper has been highlighting problems of the small man is smallminded, despicable and unacceptable.

Gangsters honed in on me last Tuesday in my Taman Danau Desa neighbourhood — and after several blows to my body warned me to “stop ruining businesses by writing further reports”.

It was an aggression against the media that should be firmly condemned.

I told police the attack could be linked to various problems featured in our Hotline section every Saturday.

Hotline gets problems ranging from traffic congestion, parking woes, gangsterism and the mat rempit menace every day from people all over the Klang Valley.

Taman Danau Desa is a mess and Hotline had on May 10 and May 24 raised for the umpteenth time the issue of restaurant operators hijacking parking lots in the evenings, five-foot ways lined with tables and chairs, cooking utensils and goods for sale, and illegal extensions to premises. I am not saying the attack was related to problems in Taman Danau Desa.

Why Kuala Lumpur City Hall has failed to act firmly is beyond us.

Merely issuing compound notices has not been a deterrent.

To be sure, Taman Danau Desa is not a level-one gangster hotbed, but the attack on me warrants greater police presence and community policing.

There is a crying need for more street cameras in the neighbourhood.

I was attacked in a backlane and the hoodlums must have known the incident wouldn’t be captured on video surveillance cameras.

Journalists should be able to do their jobs freely and aggrieved parties who think they can frighten us with violence must face justice.

Yes, I was bruised but Hotline will continue to press forward to help solve problems of the man in the street.

We are not trying to be heroes. We want to just do our jobs.

Journalists’ groups have slammed violence against newsmen, urging the authorities to look closely into this matter.

National Union of Journalists president Chin Sung Chew said the union did not agree or condone any form of violence against reporters who had the right to report the truth.

“This is a democratic country. Both journalists and readers have the right to their own opinion,” said Chin.

“Violent acts, however, should not be practised under any circumstances. It is uncivilised.”

He said those unhappy with what was being reported could lodge complaints or initiate legal action.

“The public in general must understand the role played by the media and what we do for them on a daily basis,” said Mokhtar.

“Journalists are watchdogs ... there must be checks and balances to ensure the rights of the public are upheld. We should not be attacked for it.”

Mokhtar said when fear was created, members of the press would hesitate to report or push the authorities to act on complaints lodged by the community.”

----
Malay Mail voice for the people

Malay Mail Hotline has been highlighting problems affecting the community for more than three decades. Here are some of the reports which we have highlighted recently.

OCTOBER 7, 2013: Residents in Bangsar were riled up over the increasing number of residential units being converted into commercial lots.
The problem started as far back as 2005 when several house owners in the area began renting out their premises to business operators.
Despite numerous complaints to the authorities, residents claimed little had been done to address the issue.
Investigations by the Hotline Roving Team revealed 29 houses in Jalan Telawi, Jalan Telawi 6, Jalan Telawi 9 and Jalan Terasek 4 had been converted to commercial units. A house in Jalan Terasek 5 had been converted into a hostel.
Several lots, mainly in Jalan Telawi, were also converted into legal offices, spas, boutiques, real estate offices and a mobile phone repair and accessory shop.
Of the 29 complaints, City Hall issued notices to 19 owners to cease business and vacate. They subsequently ceased operations and moved out of the area.

MAY 10, 2014: Residents in Taman Danau Desa near Old Klang Road said the shoplots near their homes were in a mess as eateries placed their tables and chairs on the walkways.
The Hotline Roving Team visited the area and found several shops had placed tables and chairs, as well as makeshift stalls, along several pathways.
Some premises had also built illegal extensions which protruded onto public walkways, over the past three years.
A pharmacist in the area said pedestrians hardly had any space to walk because of the “outdoor dining”. She said although the authorities had issued summonses to shop owners several times, the problem kept cropping up.
Taman Desa Residents Association president William Chan said residents had lodged several complaints with Kuala Lumpur City Hall over the matter but no action had been taken.
City Hall later issued 12 compounds and five warning notices, with outlets given seven days to remove all obstructions on pathways. Those with illegal extensions were subsequently issued notices to remove them within 30 days.

DECEMBER 2, 2013: An illegal workshop which had been operating for more than seven years in Jalan Datuk Haji Eusoff near Jalan Ipoh was causing nuisance to those working in the area.
The vehicles from the workshop were often parked haphazardly along the road and some of the cars had also hogged City Hall’s parking lots.
Lawyer R. Jayaretnam, who highlighted the matter to Hotline, said those working nearby found it difficult to exit the area in the evenings due to the congestion caused by the illegally parked vehicles.
Following our report, City Hall launched a raid and towed away illegally parked vehicles and issued a notice for the operator to cease operations.

MAY 24, 2014: Residents in Section 6, Kota Damansara, who pray at Surau Al-Falah were worried about their safety because of an abandoned structure next to it.
Hotline visited the surau and discovered that the two-storey structure was an extension of the surau.
While the area around the abandoned structure was clean and well-kept, locals were worried that the structure, which had been abandoned for more than a year, might give way when there was a big crowd at the mosque, especially during Friday prayers.
The Petaling Jaya City Council said the surau committee did not make any application to build the two-storey extension and the structure was illegal. The council said it would also issue a notice to the surau to demolish the extension.
Posted by Haresh Deol at 2:15 PM
at June 08, 2014