A Hall is not a Home 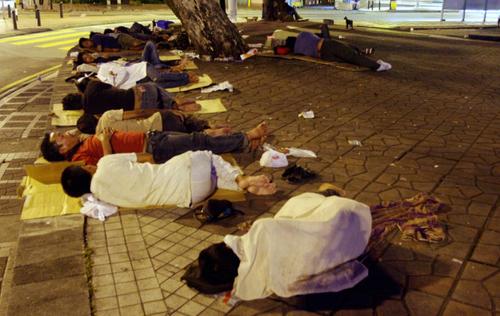 A multipurpose hall will be built by Kuala Lumpur City Hall to provide shelter for the homeless of Kuala Lumpur.In a report byThe Staron Tuesday, KL mayor Datuk Ahmad Phesal Talib said the initiative was to gather all of the city's homeless in one place."We realise there are different types of homeless people such as drug addicts, immigrants, the ignored elderly and single mothers. There are also those who work but do not want to spend money to rent a house, preferring to live under a bridge instead," he said.Ahmad Phesal said, the proposal was discussed in a meeting with the Women, Family and Community Development Ministry, Social Welfare Department, the Federal Territory Islamic Religious Department and several NGOs."We're deciding on the appropriate complex. We have made a survey on some of the buildings around Jalan Chow Kit and Lorong Haji Taib," said Ahmad Phesal.He said NGOs supplying food for the homeless will also be placed in the multipurpose hall to ensure that City Hall could carry out their cleanings more effectively."Currently, the homeless who receive food from NGOs are disposing the food packets all over the place. This makes the cleaning process difficult," he said.Ahmad Phesal said, child care facilities will also be set up in the building to help single mothers care for their kids.On May 31,AWANI745had featured a focus on the never-ending issue of homelessness, with a discussion on the possible efforts that can be done to find solutions in helping this community.Astro AWANIhad discovered that about 1,000 homeless people make some public places in Kuala Lumpur their homes every night.
********************************************************
I always believe that if one is sincere in helping then do it properly.
Otherwise stop wasting money and other people's time.
Building a multipurpose hall to house the homeless is not right.
I insist and know that a cheap house at the cost of less than RM20,000 each can be done for the poor and homeless, but DBKL is not listening.
I have channel the idea to the appropriate people who have the power to help but I see no sincerity in their actions.
Ahmad Phesal may be a good man but his heart is not for the people.
at June 12, 2014