The End Is Near

The Hidden Messages That You May Not Know

It’s been two weeks since the stunning 250,000 people brave the burning sun demanding for clean elections during Bersih 3.0 rally. Interestingly the topic is still selling like hot potatoes. Actually the rally is still hot news simply because both government and opposition wouldn’t want it to die a natural death. Understandably both sides are fighting tooth and nail as it would deliver the precious votes come the next general election. The aftermath of Bersih 3.0 is perhaps the last and biggest propaganda tool before election so whoever can manipulate it to the best will benefits the most.

Sometimes you got to wait for the dust to settle before the actual plot emerges. So if you care to see, read, listen and think over the last two weeks, you should be able to put all the puzzle pieces together. It’s become clearer why this version of Bersih was not as peaceful as previous version 1.0 and 2.0.

I’ve wrote before the Bersih 3.0 rally how some UMNO insiders were (plotting and) hoping for a chaos rally (read here). So far it didn’t disappoint and the story goes according to the script. Yes, you don’t have to go extra miles by consulting fortune tellers or look to the stars to get answers as to who were the script writer and producer of this classic peaceful turned violence film. 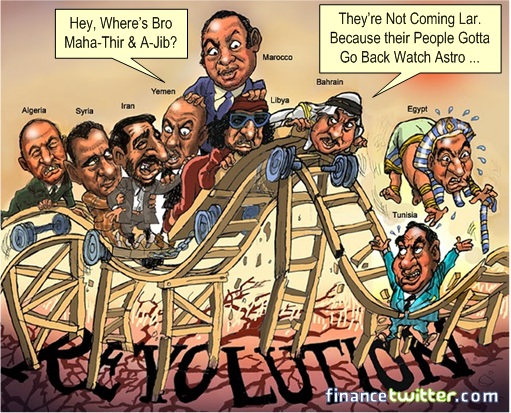 There was this theory that PM Najib was scared shit that Bersih 3.0 would be the springboard for a “Malaysia Spring”, ala Arab Spring. But Malaysia is not Arab so that’s a truckload of bullshit. Malaysians simply cannot stomach a prolonged rally. Don’t believe me? Go and read this private conversation with PM Najib and President Obama (*grin*).

If Najib indeed was imagining himself as if he was on ecstasy and couldn’t think straight, and in the process ordered the brutal crackdown on peaceful protesters, then he’s just months or weeks away from being the shortest serving prime minister of Malaysia. He deserves it.

Now, let’s see who spoke like a “Commander in Chief” right after the rally. Former PM Mahathir said the rally was an attempt to topple the government. Almost immediately, PM Najib was seen parroting Mahathir, claiming the rally participants had intended to take over Dataran Merdeka (Independence Square) and make it like the Egypt’s infamous Tahrir Square. Those statements from dictator Mahathir and PM Najib were so silly that it makes even a bulldog laughing and giggling like a hyena. That’s a huge insult to the country’s Military Intelligence.Do you know that Malaysia’s Police and Military Intelligence are amongst the best in the world? 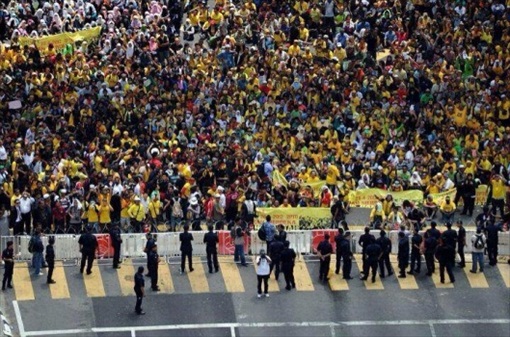 You meant to say the intelligence report only discovered the attempt to overthrow the government at the eleventh hour of the rally, just before Anwar-Azmin tag-team was seen showing that infamous hand signs? Given the fact that Najib’s administration actually allowed the Bersih 3.0 rally to proceed initially but flip-flop and claim it was an attempt to overthrow the government post-rally only goes to show that Najib was so stupid that his predecessor Abdullah Badawi looks like Albert Einstein. Didn’t his cousin, Home Minister Hishammuddin Hussein announced Bersih 3.0 was not a security threat hence the permission to walk the streets?

Actually it doesn’t matter if opposition de-facto leader Anwar and his lieutenant Azmin hand gesture exchange was indeed a signal to breach the barricades. Even if both of them were strapped in baby strollers and made to suck on pacifiers, the violence would still happen. You don’t think those police violence started by planted agents were mere coincidence, do you? The most disturbing statement came later from Mahathir who told voters to vote PM Najib-led government so that it would be able to revive the draconian ISA (Internal Security Act). But the humour part came from none other than former IGP Hanif Omar. 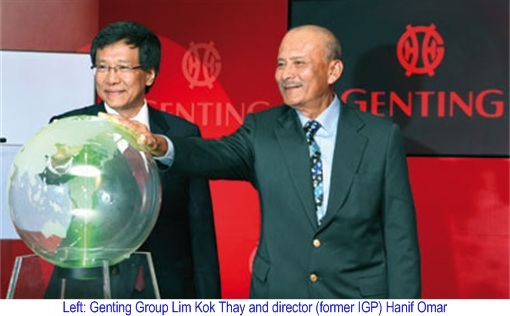 Just when you thought the former IGP for 20 years was enjoying his fruits by virtue of directorship in gambling heaven Genting Berhad, banking AMMB Holdings Berhad, AmBank (M) Berhad, AmIslamic Bank Berhad, AMFB Holdings Berhad and AmInvestment Bank Berhad, the low-profile Hanif Omar suddenly jumped and claimed pro-communist individuals involved in the 1970s demonstrations were seen in Bersih 3.0 rally. If Hanif Omar, who was the longest serving “budak suruhan” (boy-servant) famous for taking Mahathir’s order in cracking opposition during Operasi Lalang 1987, speaks in support of Mahathir, you can smell troubles miles away.

Interestingly, not one but three former IGP who served or used to serve Mahathir’s interest, came out in support about the laughable communist element in modern rally. You can bet every penny that the old man is damn serious about defending his own UMNO legacy by hook or by crook. If you’re still couldn’t figure out the plot, it’s all about denying opposition’s right to take over the federal government, in case the planted hundreds of thousands of foreigners designed to deliver votes in favour of present government couldn’t stop opposition from winning the next federal government. It was never about Malaysia Spring but rather a sore loser who couldn’t afford to handover a 52-year-old tainted administration peacefully to a new government. 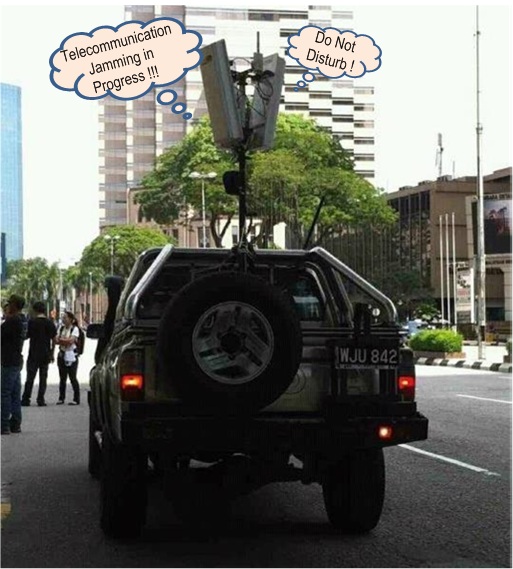 So don’t think for a second that the opposition PKR-DAP-PAS can form the next federal government even if they could somehow get the numbers to do so. The coming election results may be blacked out, telecommunication services will be jammed the same way it was done during the Bersih 3.0 rally, ballot counting rooms may lose power suddenly leading to chaos, losers from Barisan Nasional will be declared winners by the election commission despite objections, DDOS attacks intensifies, opposition candidates go MIA and whatnot.

Even if the above fails, the palace may be guarded by thousands of police (and army?) toprevent opposition from delivering their winning tickets to the King to form the next government.
Najib administration will emerge from the palace as the new government even if they don’t have the numbers. To hell with democracy and foreign criticisms – there’s no way Najib administration will handover the government simply because the stake is too high. And if the attempt to form government fails, the sore loser may declare emergency.

Yes, going by how the exercise of creating havoc goes during Bersih 3.0 rally, it seems Mahathir is ready to take over control of the situation, if the election results are not in Barisan Nasional’s favour. He has done the crackdown before during” Operasi Lalang” 25 years ago and for the sake of his family dynasty, he would certainly do it again. 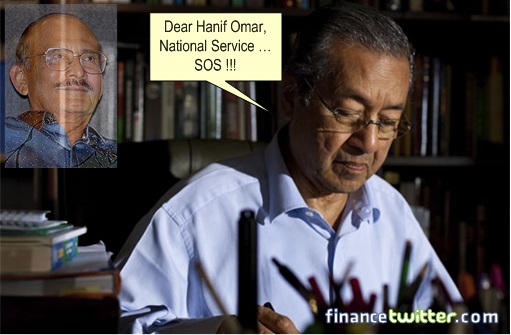 The only difference is – 25 years ago there was no internet and certainly no Facebook and Twitter. Hence, it’s hard to say if the old man’s plan will work the way it was planned in this new technology age. In fact, Mahathir can’t tell for sure if Najib administration can win the young voters’ heart after billions in free flow money was given away.

In a conventional warfare without social networking and internet, Mahathir can tell at the fingertips the number of seats he can win (via cheating). But a full-blown internet warfare is something he has not done before. And he’s not taking any risk hence the need for a rehearsal for a mini violent rally as seen during Bersih 3.0.

There’s also one variable which Mahathir needs to consider very carefully. Unlike the racial riots in 1969, any provocation for similar incident now involves multi-racial composition. It’s safe to say it will be PKR-DAP-PAS versus UMNO alone. Furthermore unlike 1969 where UMNO politicians were largely poor, most of UMNO politicians nowadays are super rich. Therefore the landscape is rather different should the old man decide to use brutal force to stay in power since the chain reactions are unimaginable and could backfire badly. Are UMNO warlords willing to put their wealth on the gambling table with regards to the expired old man’s method?

Judging by how Hanif Omar was appointed by Najib administration as chairman of the six-member Independent Advisory Panel set up to probe the Bersih 3.0 rally in spite of the fact that the former IGP already prejudged the rally as having communist element, you can be sure that another crackdown is in the horizon. It was like asking Adolf Hitler to probe Gestapo’s brutal interrogation method. There’s another hidden objective behind police’s brutality on that burning hot Saturday’s rally that PM Najib didn’t know. If somehow the 250,000 genuine peaceful protesters turned violent, the old man’s plan works even better.

History repeats itself and national emergency could be declared with suspension of Parliament. A National Operations Council (NOC) could then be established and PM Najib could be asked to resign with deputy Muhyiddin tasked to head the NOC. With almost unlimited power, the NOC can basically do anything it wishes to. Sounds familiar? It was a brilliant plan which could be used to kill two birds with a stone – eliminate oppositions as well as enemy within UMNO itself. Hey, Mahathir is no ordinary politician and for him to survive 22-year rule fighting internal power struggles within UMNO, it speaks volume about his capability. He can squeeze Najib’s grapes anytime he wants and yet the prime minister can only smiles and says harder. 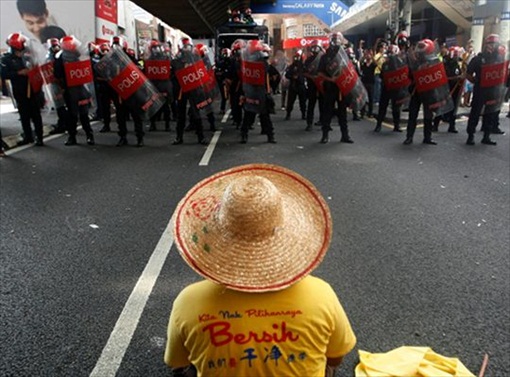 One more thing – why did the old former prime minister suddenly made his move? On paper, it seems there’s no chance for opposition to win the federal government. Did the old man receive troubling reports that allies within UMNO are ready to jump ships after the coming general election? While the arrogant UMNO was trumpeting about supports from the public, could Anwar quietly seal some deals with unexpected enemies such as with Sarawak’s Chief Minister himself? Hmm, that would be another interesting story for another day (*grin*). As for now, I hope the oppositions are ready for any eventualities, and that includes denial to form government even if they have the numbers.
at May 22, 2014