An article a few understand

Malaysia is not a failed state. It is a failing state…it is in the process of failing. 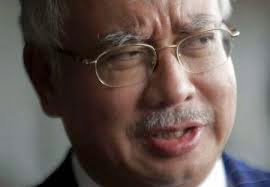 Malaysia is not a failed state. It is a failing state…it is in the process of failing. Those of us who understand the need for any government official – whether appointed or elected - to adhere to the principles of accountability and transparency in carrying out their work of government in a democracy, must surely be appalled at the state our nation is in today.

Good governance ceased to be a concern of this Barisan Nasional government a long time ago.

Many millions of us are now demanding that government officials – whether appointed or elected – must be held accountable for their illegal, inept and corrupt actions done in the name of government. Government by them have become arbitrary and self - serving.

What is worrying is the inability of the many millions of our informed rakyat to exercise their basic right to hold these government officials accountable for their actions through the process of elections. The Malaysian electoral process is grievously flawed.

That in a nutshell is the situation our country is in today.

Even of bigger concern is the division within our people along racial, religious and political lines. These division are now being exploited by the political process for the advantage of the political few at the expense of the many.

Let me recap what I have said so far.

Millions of Malaysians are now demanding good governance. Yet there are millions still who are comfortable with the way government is done because race and religion colors their perception of what the democratic process should be.

These millions of Malaysian who are comfortable with the way government is done today are, in the main, Malays.

Why is this so?

You need to understand that for millions of Malays, Malaysia is the only home they know. Political power is theirs and with political power the illusion of economic dominance and all the trappings of it are much in evidence. They are comfortable that a Malay is the Prime Minister and his cabinet and his government are predominantly Malays. Their religion, Islam, dominates physically and spiritually across the length and breadth of the nation. The education of their children seems to be well catered for and there seem to be more than enough schools, colleges, and Universities for Malay children to go to. It would seem that economically the Malays are well and truly on their way to success – what with the Bumiputera and Ketuanan Melayu driven policies of this government. The Banks, the Insurance companies, Petrona, MAS, the massive statutory bodies like FELDA, RISDA, UDA are all run for the economic well-being of the Malays. The country’s defence and sovereignty are in the hands of the Malays. Everywhere they look the Malays can quietly tell themselves that Malaysia is indeed their country!

But as I have said earlier, political power can give the illusion of Malay dominance over the non-Malays in Malaysia….and that is all that it is….an illusion! An illusion to cover up the abuse and use of government to benefit the few at the expense of the many.

For the Malays who understand this “silap mata” by Umno to rule and divide our people so that they can continue with their economic pillaging and plundering of our country for their own self interest, the time has come for us to tell a few home truths to our own people.

And the simple truth, as I have said at the beginning, is that our nation is failing.

Let us start with the latest known folly of this Malay led Barisan Nasional government.

Bank Rakyat. This is a Bank with an authorized Share Capital of RM3 billion, with 145 branches offering Islamic Banking facilities to its customers. It is an entity under the control of the Malay dominated government, specifically the Ministry of Domestic Trade, Cooperatives and Consumerism. 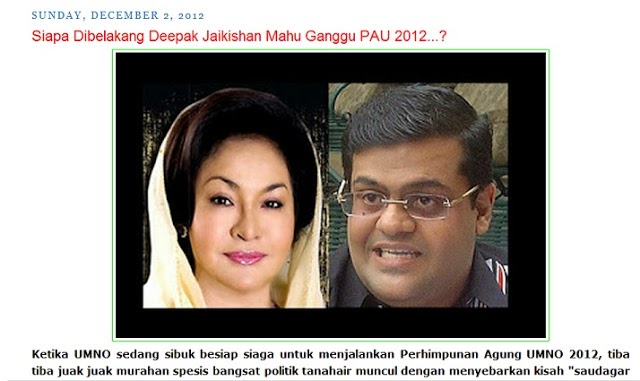 At par with that note written many years ago by the late Harun Idris instructing the Bank to give a loan to a politician because the said applicant happens to be “orang kita” is the interest free loan of RM30 million given to Deepak Jaikishan.

All you Malays out there…please note….the loan was given to Deepak Jaikishan. Not a Malay, not a Muslim but someone who have claimed that the wife of our Prime Minister, Rosmah Mansor, is like a sister to him!  And this is the same Deepak that has accused Najib Razak, his wife, family and leading UMNO politicians of complicity in bribery, political favoritism, murder cover up and alitany of other scandals.  The question that begs to be asked by us Malays is this : Why has Bank Rakyat agreed to give the RM30 million interest free loan to Deepak? 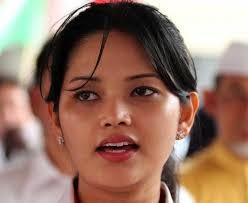 Telok Intan: Why has Dyana Sofya, a young, articulate Malay lawyer chosen to represent DAP rather than Umno? Dyana was educated in an institution - UITM - established specifically for the Malays and her mother is a member of UMNO. Why has the UMNO  dominated government seen fit to use their Home Minister, their Information Chief, their Communications and Multimedia Minister, its Media and it's extensive electoral resources to label Dayan an ingrate and a traitor to the Malays? All this arrayed against Dyana Sofya, a Malay who has somehow managed to emerge triumphantly over the "Umno culture" that has seen Umno lose their popular mandate at the last general election! 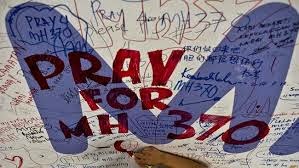 Flight MH370. There is nothing about the recent history of MAS that the Malays can be proud of....nothing at all. From a cash reserve of RM$600 million in 1994 MAS began hemorrhaging cash and accumulated a loss of RM9.4 billion by 2000. The recent loss of MH370 is simply a culmination of MAS and Umno's incompetence, failures and massive rorts and financial scandals that has now certainly cemented MAS's status as a failed national airlines! And unlike Perwaja. Bakun or the IPP's and Toll agreements - MAS was strictly a Malay affair from beginning to end. 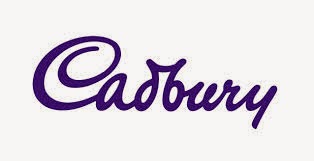 And now a Jihad has been called against Cadbury. Have the Muslim finished the other Jihads that has been declared upon the Chinese, the Indians and the Christians in the past?
What other Jihads will be declared in the coming months?

The concept of Jihad is also a struggle against one self for self improvement!

What I have outlined at the start of this article - Bank Rakyat, Telok Intan and MH370 are but the tip of the iceberg of the damage that Umno has already inflicted upon the Malays since Merdeka. Our responsibility now is to ensure that no more harm will be done by Umno to burden the future generations of Malays and Malaysians that will come after us. That will be our Jihad!

The Malays need to call a Jihad upon themselves not because they are about to lose their nation to the Chinese or to the Christians. Should Malaysia eventually failed it will be the Malays who would be left with Malaysia and it will be our failed state. The 'others' may or may not stay but it has to be in all our interest to begin the process of taking charge of our future destiny now rather than later.

And this can best be served by understanding that we are all in this together - the Malays and non-Malays. With our many millions, the Jihad to change our self should culminate in banishing that illusion of good government, the need for Ketuanan Melayu and the non-existent threat of race and religion and consign these illusions forever into the abyss that Umno and the Brisan Nasional coalition they led, have already dug for themselves!