It is okay and morally right to bless a kangkung 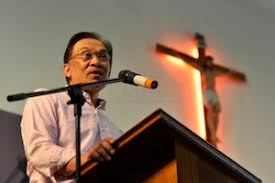 It is big sin to talk inside a church
A pro-Umno academic has criticised the recent church visit by an opposition leader, and urged Malay candidates in the upcoming Kajang by-election not to “sacrifice the dignity of our religion, race and country”.

"Incredible! During the old days Malays only stood outside a church or a temple. Just like going into the market. They will avoid looking at pork and even worry if the flies that swooned around pork would fly into the halal area. That is how careful they were," said university lecturer Ridhuan Tee Abdullah, writing in Malay daily Sinar Harian, today.

"But today, Malays visit the church without feeling embarrassed, for the sake of politics. It is not impossible that one day, they will join the others to weigh pork," he added.

Ridhuan was clearly referring to the visit by PKR de facto leader Datuk Seri Anwar Ibrahim to the Holy Family Church in Kajang on February 16.
Addressing a packed audience which included non-Christians, Anwar, as part of his series of meet-the-people sessions ahead of the Kajang by-election campaign, spoke on brotherhood between races and religion by quoting verses from the Quran and the Bible.
Without naming Anwar, Tee referred to the opposition leader as the “Malay who went into a church for political reasons”, and offered his advice to Muslim candidates.
"I urge everyone who wishes to contest in Kajang not to be too obsessed in winning, to the point that we sacrificed the dignity of our religion, race and country. Remember, once your dignity is gone, it is hard to replace." he wrote.

Ridhuan (pic, right), however, was quick to point out that he was not against Muslims going to non-Muslim places of worship.

"I have sent my parents to the temple for prayers and visited other parents at the cemetery. This is called being good to the elderly," said the Chinese-Muslim convert who has openly supported right-wing Malay groups such as Perkasa.
Yesterday, Anwar met some 800 devotees outside the Sri Maha Mariamman temple in Taman Delima, Kajang, his first major engagement with the Hindu community since announcing his candidacy for the Kajang by-election.

Anwar will be challenged by Barisan Nasional's Datin Paduka Chew Mei Fun, as well as two former PKR members who have stated their intention to join the contest, Datuk Zaid Ibrahim and Yuktes Vijay. – February 24, 2014.
***************************************************************************
Ridhuan when your mother and father were fucking they must have committed a shameful act because you were conceived.
You not only bring shame to yourself but to the Chinese and Muslim in Malaysia.
My family (Christian) had a Muslim boy staying with us for couple of years.  Every Christmas Eve he would follow us to Church to pray and celebrate Christmas.
Once in a while he would join us for dinner even though pork was served.  He never once touch the pork meat but would consume others.
The Muslim boy's name was Alif.  His father was an extremist Muslim but not mentally sick like you.
In the name of Allah stop poisoning the minds of the innocent and DO NOT THINK FOR OTHERS.
at February 24, 2014