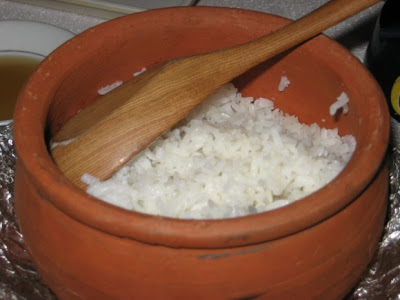 Last year, Indra Ningsih, an Indonesian maid, was charged in Hong Kong for allegedly adding menstrual blood into her Hong Kong employer's food in an attempt to improve her difficult working environment. The 26 year old Indonesian maid believed that the vegetable recipe she prepared, with her menstrual blood as an ingredient, would improve her strained relationship with her employer. She was however caught in the act by her lady boss before she could proceed with her plan... Some southeast Asian cultures believe that virginal fluids, including menstrual blood, have special supernatural powers and is commonly used by individuals and witch doctors in rituals. In Malaysia, a somewhat related recipe is called nasi kang kang. According to Malay folklore, a woman who feeds her husband or boy friend with nasi kang kang can have absolute control over him. It is a very easy recipe to follow - no advanced cooking skills are required. You just need patience. The female must squat (kang kang), without panties, over a pot of steaming hot rice (nasi) until the steam condenses at her muff and thighs. The condensed sweat and virginal fluids are then allowed to drip into the pot of rice. The fluids are then mixed thoroughly with the rice and served to the clueless man together with his favorite dishes. There are many variants to this method. Some people say that it works only if done during a full moon, while others say that a full moon is not necessary. Some women have reportedly improvised this recipe successfully by using claypot chicken rice. This method is useful for busy career women - just tar pau(take away) the claypot chicken rice from a shop and do the kang kang at home. Mix the damn thing up and serve it to the man. No need to keep a pet dog, just get a man. A man can be just as obedient after eating nasi kang kang. Caution: Nasi kang kang doesn't work on all men. If it doesn't work on him, then something bad will happen to you. Take note of this warning.
MalaysianLife
************************************************************

AN Indonesian maid has appeared in a Hong Kong court accused of adding menstrual blood to her employer's food in an effort to improve their stormy relationship.
Indra Ningsih, aged 26, mixed the blood in a pot of vegetables in the belief that the recipe would help ease her difficult work environment, The Standard newspaper reported.
In some southeast Asian cultures, menstrual blood is thought to have special powers, the paper added.
The maid has been charged with one count of "administering poison or other destructive or noxious substances with intent to injure'' and has not yet entered a plea.
The report cited a prosecution statement that said Ms Ningsih's ingredient had been discovered after her female employer, surnamed Mok, peered through the kitchen door and saw the helper acting suspiciously.
She entered the kitchen and found the accused throwing something into the rubbish bin.
When she checked the pot, she found a suspicious substance mixed with the vegetables and water, the English-language daily said.
Ms Mok later discovered a used sanitary napkin in the bin and called the police.
Ms Ningsih told police Ms Mok had been unhappy with her performance since she was hired last July.
News.com.au
at February 13, 2014