Tiga Line the soul of UMNO

Based on her five -year research in Malaysia, French PhD holder Sophie Lemiere said that the NGO Pekida or Tiga Line alludes its allegiance and loyalty to the Malay community, royalty and Islam.This can be seen in its symbol of red (for blood), yellow (royalty) and green (Islam), she said.Lemiere added that based on her extensive interviews with its members and Internet search, groups like Pekida are a complex network of discreet NGOs created by gangs for which political militancy is a business."Pekida is a generic name used to describe an intricate network of gangs and NGOs."In reality, the name Pekida is the name of one of those numerous NGOs created by this network to offer political support, legalise part of their activity, and ease the reception of funds from the ruling party," she noted.Lemiere said there may be other groups that call themselves Pekida but go under another name as well or may not be linked with Pekida.She added that the two main notions to be highlighted are the common challenge for any gang for survival and the best way to secure survival is through power and money.**'Power and money driving force'**"The main objectives of the group is power, profit and money, which imply that members are involved in illegal activities, and may use different degrees of violence," she said."Its basic ambition is often reshaped into ideological terms in order to facilitate recruitment, group coalition and justifying the use of violence," she added."Sustainability of the group is ensured by adaptation to political and social changes. A gangs' identity may change according to opportunity," she stressed.Lemiere said political situations which are in transition are favourable to the development of gangs and open opportunities for relationships with political parties.In this context, gangs may become entrepreneur of politics, or connivance militant, to whom political actions are subcontracted in order to maintain political power, she added."It's like an angry chameleon, which can change color and shape anytime, but always remain with a violent potential," she said.Lemiere, who just received her PhD from Sciences-Po (L'Institut d'études politiques) Paris on Ethno-nationalist and Islamic movements in Malaysia, was in Penang to present her paper in Universiti Sains Malaysia yesterday.Her paper, 'Gangsters and Masters: Connivance Militancy in Contemporary Malaysia' was based on research from 2008 to April this year.Lemiere is based in Singapore and affiliated with the Asian Research Institute of the National University of Singapore. 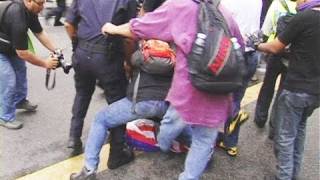