With Friends Like Ibrahim Ali & Michelle Yeoh, Who Needs Enemies?

Post Mar 2008 general election, Malaysians were introduced to the concept of political frogs, magnified by the infamous lost of Perak state by Pakatan Rakyat (PR) to Barisan Nasional (BN). It began with 3 Pakatan Rakyat state legislators defected due to money and sex scandal. The most famous of the trio was definitely former Jelapang Assemblyperson Hee Yit Foong. You may scratch your head how could she betrayed her own party who had groomed her from an unknown to the first non-Malay female deputy Speaker in the country’s history. But the temptation of RM25 million was simply irresistible. 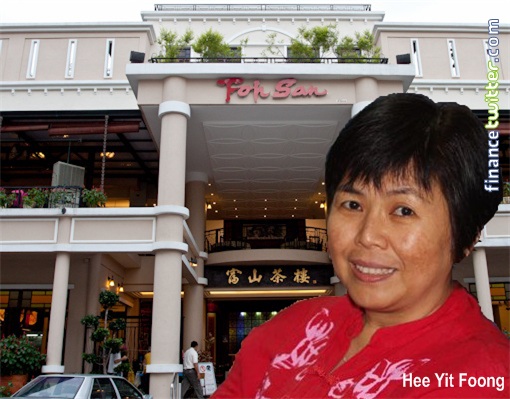 Five years later today, her decision in choosing money over party’s struggles proves to be a fruitful one. Almost every Perakian was waiting for the right moment to teach her a lesson but unfortunately she wasn’t “winnable’ enough for caretaker PM Najib to nominate her again. Amusingly, frogs like Zulkifli Noordin and Ibrahim Ali would represent Najib’s BN to the 13th general election battlefield. If Hee Yit Foong didn’t take the RM25 million offer, she may not be a multimillionaire today and perhaps could be dropped by her party as a candidate as well. At least she can enjoy her dim sum now with her latest business acquisition – Ipoh’s famous Foh San Dim Sum Restaurant.

Ibrahim Ali, popularly known as Ibrahim Katak (Ibrahim the Frog), is perhaps themost successful political frogs to date in this country. He hopped happily from BN to Semangat 46 and later to PAS before becoming BN-friendly frog (though still under PAS ticket). It could be due to his magnificent happy-go-hopping talent which impressed former PM Mahathir, so much so that the former premier entrusted Ibrahim with Perkasa’s presidency. Just when everyone thought Ibrahim Ali could be sharing the same bench as Hee Yit Foong, the former suddenly sprang to life when he is set to represent BN against Kelantan Nik Aziz’s son in Pasir Mas. This brings the much sought after entertainment and excitement, without which this election would be too dry and boring. 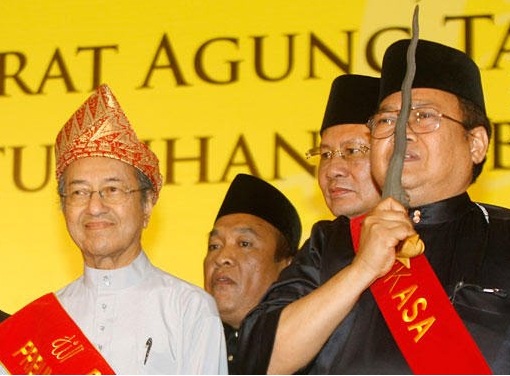 If you think the previous 2008 Election was the Year of Frogs, wait till you see this year’s results. If 2013 is the Mother of Elections, this year will also known as Year of Mother Frogs simply because there would be hundreds of frogs hopping for fortunes. What do you think the record number of 270 independent candidates (79 for parliamentary and 191 for state seats) were doing? Surely they were not there to lose their deposit money. While some of them were merely paid and planted to spoil the votes, many of them were waiting to be instant millionaires. They hope to hit jackpot the same way Hee Yit Foong got her RM25 million five years ago.

2013 will also be known as the election year where the Chinese voters are spoil for free entertainment. Hoping to get Korean “Psy” (pronounced “Sai”) delivers some votes, Najib was humiliated with “Kanasai” instead. Caretaker PM Najib then arranged for Hong Kong stars such as George Lam, Leon Lai, Hacken Lee, Alan Tam, Grasshopper to capture Chinese hearts in Penang in another attempt to sway their votes. While local singer Eric Moo was criticized for his short speech that the coming elections are clean and fair, the latest speech by actress Michelle Yeoh urging people to vote for Najib was bombarded with heavy criticisms. 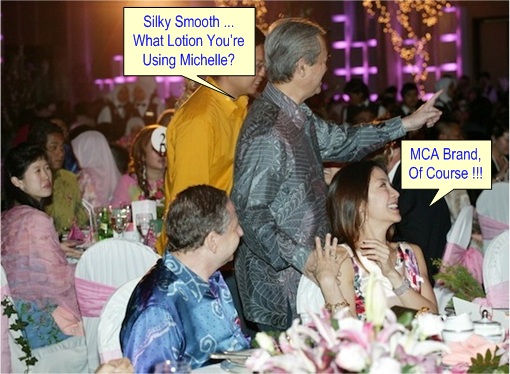 Short of calling Michelle Yeoh a slut and prostitute, some Facebook naughty comments dug the past and said if the international celebrity could let herself touched by former PM Abdullah Badawi, she could literally do anything for her own selfish monetary gain. Of course many said she was not fit to play the role as the Myanmar democracy figure Aung San Suu Kyi in the first place, since she supports the evil corrupt and brutal BN administration. Actually, Michelle Yeoh has her own right of which political party to support. After all, Malaysia is a democratic country so one should not force their own political belief into Michelle Yeoh’s throat. 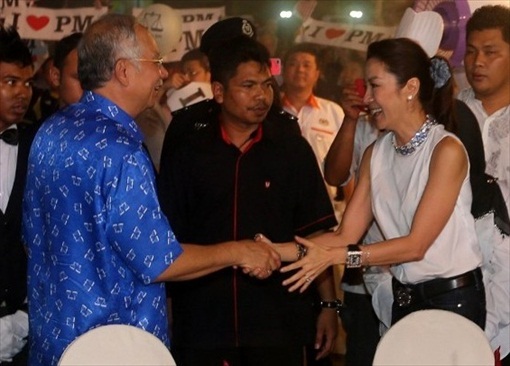 One man’s meat is another man’s poison. PR supporters may think BN was poison that everybody should avoid at all cost. But to Bond girl Michelle Yeoh,BN could be her piggy bank and Najib her sugar daddy. Nevertheless, the moment Michelle Yeoh publicly praised Najib and “urged people” (during a freeflow of wine, dine and songs session) to vote caretaker prime minister, she crossed the line. People saw the actress as “campaigning” for the tainted Najib Razak and that triggered many people spamming her with criticisms. It’s one thing to support Najib Razak but another thing altogether to lobby by telling people publicly to vote for the caretaker prime minister. 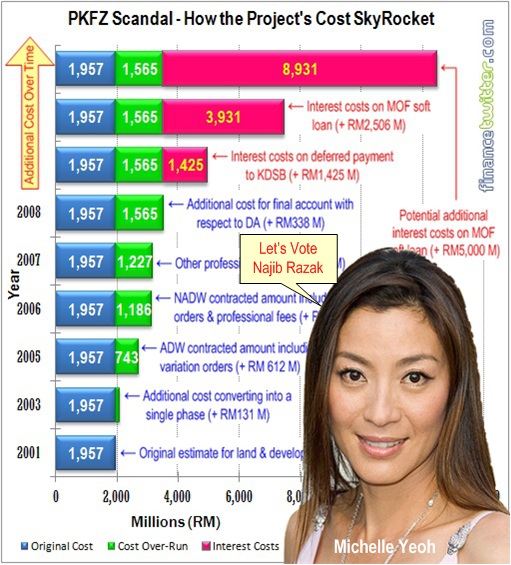 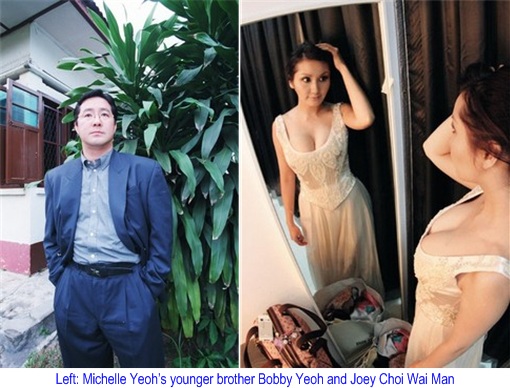 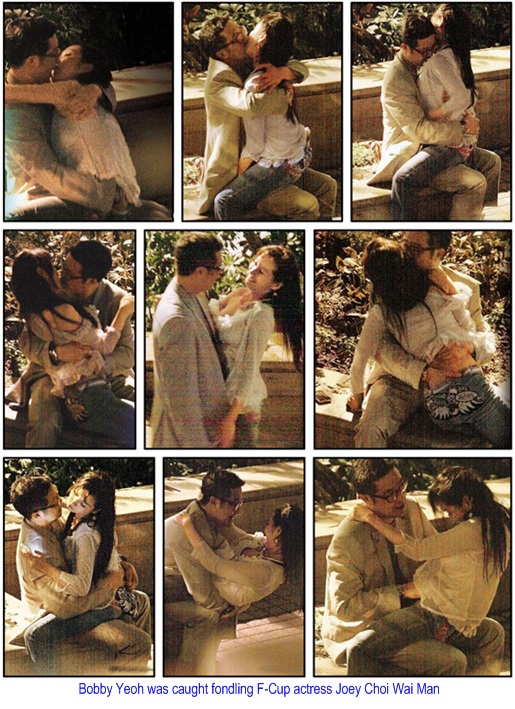 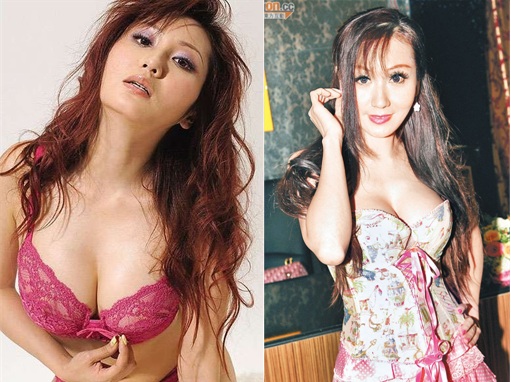 Michelle Yeoh herself appears in local advertisement such as Anlene products. In Malaysia where BN controls all the media, it’s impossible for people like Michelle Yeoh to get any job unless she sucks up to the regime. Her husband, former Ferrari Formula-1 owner 66-year-old Frenchman Jean Todt, was appointed as Malaysia tourism ambassador with annual fees amounted to RM593,400 alone plus RM388,000 for the couple’s holidays in Malaysia. If that was not bad enough, taxpayers’ money of RM360,000 were spent on their flights excluding accomodation, travelling and lifestyle allowances. Michelle Yeoh and her husband were also speculated to have been given a piece of land in Pulau Besar, Terengganu by the BN regime. 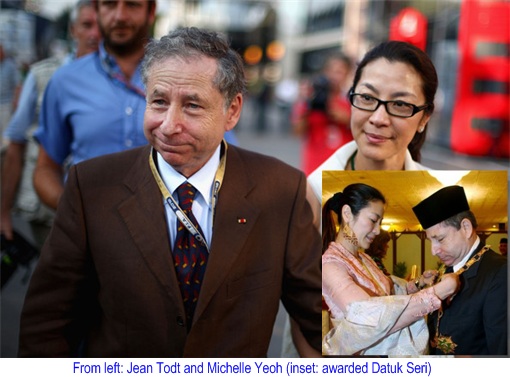 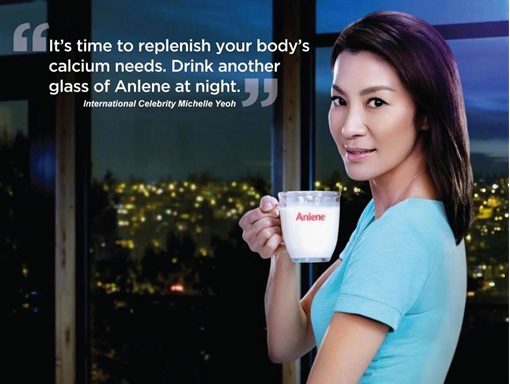 Facebook fans accused Michelle Yeoh of knowing close to zero about the suffering of the average Joe and Jane under BN administration, since the international actress live a luxury life overseas and spend very little time in the country. Certainly she also knows nothing about the country’s RM500 billion debt, illegal foreigners, crimes rate and whatnot. Heck, if she really loves Najib that much and think the BN regime was the best invention since sliced bread, Michelle Yeoh should ask Najib to nominate her to stand at a parliamentary seat for the coming general election. Based on her popularity, she should have little problem winning a seat for Najib. 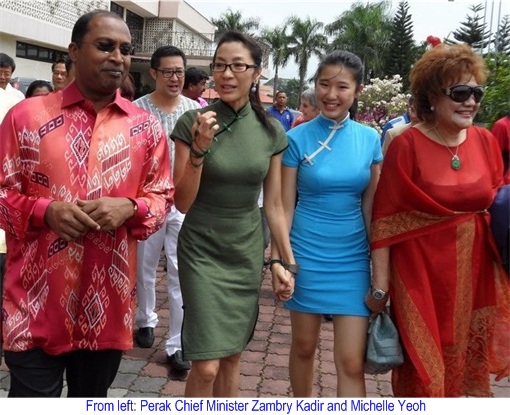 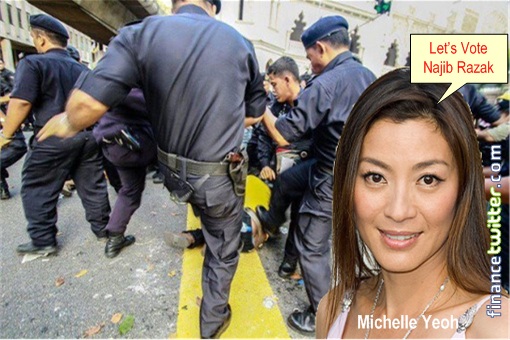 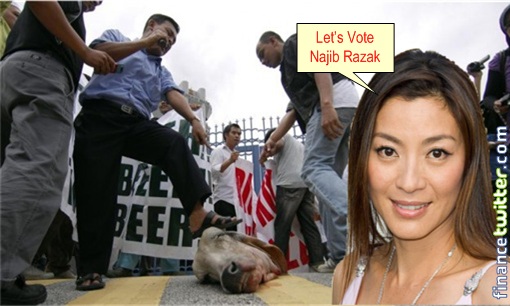 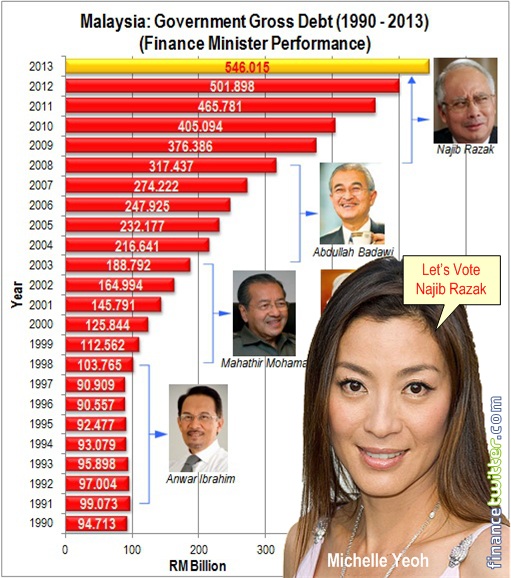 Like it or not, Michelle Yeoh doesn’t actually care, even if you scream till foam at mouth, about BN regime’s corruption and bad governance. She loves rubbing shoulder with politicians. She has tons of money, a “kwailo” sex partner and fame. For now, perhaps she hopes to get the next “Tan Sri” title and to help her family get new projects from BN regime. It’s definitely a small price to pay by sucking up to Najib Razak. Just like Jelapang millionaire Hee Yit Foong, you don’t have to be a genius to figure out money as the main motivation for Michelle Yeoh.
at April 22, 2013

Muslim Girls Get Sex With Her Hindu Boyfriend

Teacher Fucked By Her Student in A Class Room

Muslim Girls Get Sex With Her Hindu Boyfriend

Teacher Fucked By Her Student in A Class Room