A letter waits no reply 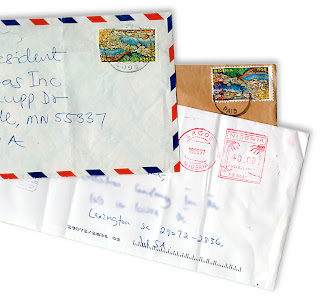 “Promises fulfilled’’, "Share the wealth of the nation’’ and "appreciation’’ are three different phrases of words. Ask yourself, which phrase sounds better? It must consider the timing, when and why it was mentioned. Let me put clearly why it looks different.

“Appreciation’’ – It was the first time in GE12 that Penang was captured by the opposition and ruled. They never waited 52 years to decide to appreciate the senior citizens with RM100. With short term rule and efficient spending, they helped the needy. They cannot aid every citizen because funds were limited. They do not have abundant money like the federal government. With limited funds, the Penang government did such a good deed within their short period of rule. They used proper words like “Appreciate the senior citizen’’. Actually Lim Guan Eng is very smart to hit two mangoes with one stone. He appreciates the senior citizen because their elderly advise had turned their family to vote and select his government. Another he expects the elders' influence to make him another winner in GE13. He made the scenario attractive.

‘’Share the wealth of the nation’’ – Also these words are making things worse. It contradicts BRIM 0.1 and BRIM 0.2! At least you can escape with “Promises fulfilled’’ but not ‘’Share the wealth of the nation’’. Why? Rakyat has been quietly asking the question, what have the previous prime ministers done with the wealth of the nation? They never shared with the Rakyat. Where did the money go? Was it was absconded to their own pockets and the pockets of former ministers? These questions can able to sway votes.
You should recheck all your PhD advisors around you. Let me tell how you should quote for BRIM assistance. “With the economic slowdown, most daily needs costs have risen. Poor Rakyat cannot cope so many wrote and appealed for assistance at least once a year to reduce their burden of their family, school going children and senior parents. This made me shed tears in my heart so I decided in the BN cabinet to help the needy. We came up with the idea of BRIM to help the poor Rakyat. It is alright, whoever accepts these cash assistance by our government is not obligated to remember or thank me. I do it as a servant of God to help all Rakyat as my own family. I will be very happy if my BN government helps to lessen your burden. In God’s will, if Rakyat chooses to have me lead in future, I may come with some new ways to help the Rakyat.”

In Politics, words and actions are important to win people’s heart. If you had used what I quoted above, it will psychologically pull the crowd to your side. To win further, you must spend three days in a poor family's house and use it to highlight to the press and media that ‘’you clearly understand what the poor Rakyat needs. If Rakyat gives me another term, I may use my power to help in more ways.’’ It sounds better.

Now, come back to BRIM assistance. My wife was very happy that that small assistance helped my son’s school needs. To collect the cheque, I followed the instruction letter to the destination. In the hall, they talked about BN's past deeds and asked us to continue supporting BN. Some people along my row told me BRIM is a bait to catch votes. I smiled at them and did not comment. After receiving the cheque, I went out of the hall. Alas, a few Special Branch Police were roaming around. I intended to slip away quietly but they saw me and came to me. Most of the SB Police know me. Once our usual talk finished, they asked me my opinion about the Rakyat support in Penang and Malaysia. They know I will give them blunt answers.

I told them, Penang is very hard to take back. Next five years people had decided to back the opposition. Some people had earlier told me that they will support Najib but later changed their minds after Tun Mahathir’s filthy mouth. This time, maybe Federal Territory will fall to the opposition. Even some UMNO members intend to vote opposition because they were not taken care of well in the last 30 years. Whatever promised were given to some and not to all. They believe the government had used the Bumiputra 30% to earn privately by government administrators, family members and close friends and even become world richest people by robbing the Rakyat’s money. These angry Bumiputras were left idle and got cheated. After all they are UMNO grassroots’ members, too.

Last month, when I was talking about the “Allah’’ issue with my paper vendor in Bayan Baru market, one Muslim entered our conversation. Later I was told that he was a Bernama reporter. He told me that Tun Mahathir secured to rule by corrupted way for twenty-two years by blackmailing. In his rule he allowed everyone from government officers, Police, UMNO division leaders and some others to freely accept corruption money. Suddenly he took control of the Anti Corruption Agency under his arm pits. All the officers should submit the files to him directly and not the Attorney-general. He used these files to blackmail the concerned person to support him continually or face the legal consequences. No one dared go against him in whatever he does. For example, how was Anwar treated by Tun Mahathir?

Finally they asked me who am I am going to support? I told them, “Here they give I take. There others give I take. Finally I never vote for anyone. If I work only I got money and I can see my rice bowl. By voting them, are they go to help me? No. In fact, during Tun Mahathir era, I had applied ‘Private Investigator Permit’. I was interviewed by a high ranking Police officer. Some days later I received a letter from the Ministry that the Minister vetted my application ‘dengan teliti’ (Indian say, ‘puliti’) and rejected it. Private Investigation is not asking for a government grant, or asking for his fathers’ money. It is entirely a private job but they did not allow me to practice as a PI because I am Indian. Tun Mahathir got his vengeance against the Indians. Why did Tun Mahathir never admit the Indian Muslim political party (KIMMA) into the BN fold? Think!

Later, one police officer told me that Tun Mahathir wants me to convert to Islam then he will give me the PI permit. What can you see? Tun Mahathir likes to sell the religion with favours and money in corrupted ways. He doesn’t care whether a person is a hypocrite or not? What happened in Sabah? Now I remember that the Mount Everest climber's name was deliberately changed to a Muslim name by Tun Mahathir's order. He doesn't like an Indian name as a champion in Malaysian History. This was told to me by one SB police officer several years ago.

Government is urging Rakyat to be patriotic to the nation and fight crimes. These words are only whitewash slogans and not reality. Indian Police officers run brothels in Penang. As a patriot to the country, I wrote in detail a complain letter to the IGP. What happened? The same police involved in the brothel business arrested me under ISA (emergency ordinance) and detained me. During the detention, they showed me the same letter I wrote to IGP. This is where the whistle blower should be protected. They fabricated charges and detained me. All the crime they charged on me was false. The real criminal is still walking free after paying bribes. I was not satisfied so I lodged police reports twice to investigate my case. I even wrote to Tun Mahathir. Until now, the police refuse to investigate. The police are waiting for all witnesses to die then they will take action. In fact I was told by one special branch police officer that Tun Mahathir had ordered the police to put my case into cold storage. Tun Mahathir had filled the minds of police to hate the Indians and make them blacklisted by police. In this way he has suppressed the Indians from coming up.

In another incident, I was charged in court for rioting in front of Penang Police HQ. Later I was discharged not amounting to an acquittal (DNAA). I pled to the magistrate for trial and he refused. Later I had written many times to the Public Prosecutor to bring the case to court. They are refusing to bring the case to court. Not satisfied I had sued the police and the government but the case was thrown away because it was still DNAA. They refuse to discharge and acquit. Even the magistrate told me that it is my funeral and he doesn’t care. Later I learned from SB Police, here too Tun Mahathir had sniffed.

I told the SB police that after all this happened to me, how can I support BN? If I support BN, then it looks like I am supporting Tun Mahathir. If BN wins, Tun Mahathir will be the winner. That is what I had told SB. Maybe if you (PM Najib) stand in my area, I will vote for you. Definitely you will not stand in my area so I will vote only for quality candidates and not political parties.

For example, my area state assemblyman (Paya Terubong) Yeoh Soon Hin can be visible in my area monthly but not a member of Parliament (Bukit Gelugor) Karpal Singh. I saw this dun move freely every corner to meet people all through the years. Maybe I may vote for Yeoh Soon Hin but not for Karpal Singh. I have been living here for the last five years and have never seen him except on banners.

I think sometimes he talks nonsense. Sikh people from Bayan Baru were struggling to build the Sikh Temple next to the Penang snake temple. He should concentrate in helping the Sikh community and stop putting his nose in the Hindu community like the Hindu Endowment board. When Karpal Singh was standing for election one of my friends, Thomson, helped him put up posters and distribute leaflets without taking any money from Karpal Singh or his party. Once he won, he gave a letter of appreciation saying that if my friend needs any legal assistance, he can see him. A few months later, my friend got a case and went to Karpal Singh for help with his appreciation letter. Karpal Singh told him that he will charge others five thousand but he will only charge my friend three thousand. My friend tore the appreciation letter and threw it at Karpal Singh's face. Later, my friend went to a simple lawyer who settled his case for a fee of eight hundred ringgit only. We all know him only for making money and not serving the Rakyat. What a waste to elect him as a Member of Parliament.