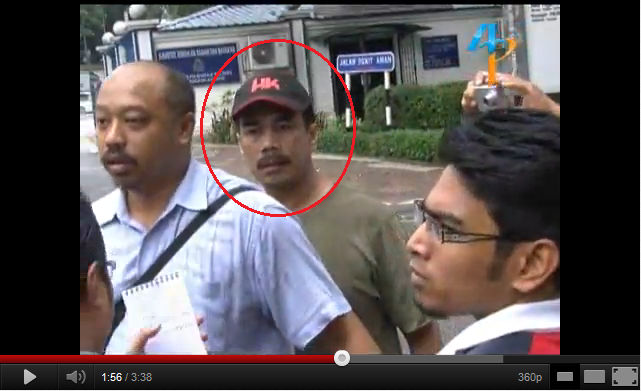 Adam Adli, who removed a flag at Umno HQ to put up an academic freedom flag, lodges police report after he and his family are targeted, including an attempted assult at Bukit Aman. See the man (circle) who assaulted Adam.

PETALING JAYA: Adam Adli, the student protester who lowered the flag bearing premier Najib Tun Razak’s portrait last Saturday at Umno headquarters, fears for his safety following continuous threats and harassment against him.
Even today, a small tussle had occurred at the Bukit Aman police headquarters when Adam, a second year Universiti Pendidikan Sultan Idris (UPSI) student, was giving a press conference after seeking advice from the police over the threats and intimidation.
Adam said he believed the man who attempted to assault him at Bukit Aman was a police personnel. He lodged a police report over the attempted attack and the other threats at the Jalan Tun HS Lee police station.
“I believe that he was a plain-clothes police officer as he was present in the meeting room in Bukit Aman when I had consulted another officer over the threats and intimidations following the flag incident.
“But when he attempted to punch me at the press conference, no one tried to stop him. There were other uniformed officers but I noticed that they didn’t take any action,” he told FMT when contacted.
When contacted, Bukit Aman could not confirm if the alleged incident had taken place.
Last Saturday, during a rally against the government’s decision to amend the Universities and University Colleges Act (UUCA) and protesting for academic freedom, Adam had  lowered a flag bearing Najib’s image and raised the “Academic Freedom” flag instead at the Umno headquarters in the city centre.
Although the ‘freedom flag’ was only raised for five minutes, many Umno members criticised the move. Some quarters even made violent physical threats against Adam and demanded an apology.
Family targeted as well

Adam’s (photo, right) family in Penang was also harassed over the weekend. Adam included all these threats in his police report lodged today.
Fearing his safety, he said: “I am chased on twitter and people have been messaging me continuously, so much that I have switched off my phone.
“My safety is not guaranteed any longer,” he said.
The Teaching English as a Second Language (TESL) student defended his action saying that he was well-aware that he had to respect the flag
“There are many misleading reports saying that I stepped on the flag but I was holding on to the flag the whole five minutes so as to not step on it or let anything happen to it.
“I was fully aware on how to respect the flag. I didn’t even leave it on the floor. Even if the guards didn’t tell us to raise it up again, I would have done so myself,” he said.
He added that the gesture to lower the flag was to show that the university students were serious in their cause and demands.
“That’s the only reason why I lowered the flag. They are trying to divert attention from the real issue at hand”.
****************************************************************************
Once again the police had abused their position to intimidate a student.  Seeing that the police have killed Kugan and many others, this incident at Bukit Aman once again demonstrated that the police are not police but a bunch of gangster who does not believe in the laws of the country.
I hereby call upon all student union to make a stand once and for all to the police and UMNO Government that if anything were to happen to Adam and his family there will be civil unrest in this country.
I believe the moment has come for a death to happen and all hell will break loose.
I therefore DARE THE POLICE AND UMNO GOVERNMENT TO JUST HAVE ONE DEATH IN THEIR HANDS AND WATCH THE DEMISE OF UMNO FOR GOOD.
at December 20, 2011