The mounting pressure from 18 days of historic protests finally drove Egyptian President Hosni Mubarak from office, after 30-years as his nation’s iron-fisted ruler. But the dictator should not shed a single drop of tear because the fortune he amassed is more than enough to finance his retirement comfortably. It would be nice and jaw-dropping if Forbes can compile the world’s richest dictators or politicians simply because it would put world’s richest man, Mexican Carlos Slim (worth about US$54 billion) and Bill Gates (net worth about US$53 billion) to shame.

Armed with suspended constitution for 30 years, Hosni Mubarak was in virtually every piece of business deal in the country thanks to guaranteed profit from monopolies, red-tape fees, bribery fees, nepotism and whatnot. The British Guardian newspaper estimated the wealth of Mubarak and his family at somewhere between US$40 billion and US$70 billion. That’s about US$1 billion to US$2 billion net profit annually on average, not bad for a job as a president ruling a nation with GDP per capita of just $6,300. 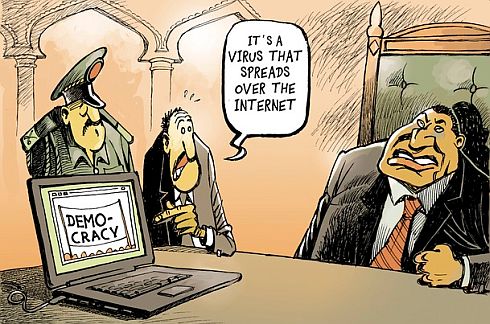 In fact, Mubarak knew it was game over when the protesters persisted even after he cut the nation’s internet access and use of forces to intimidate the tens of hundreds of protesters. And his delayed exit was definitely not to pray for a dignified exit but rather to buy time to move money around and hide significant parts of his fortune. If former Philippine President Marcos had US$684 million on deposits in various Swiss banks alone, expect nothing less than that from Mubarak’s Swiss accounts. The Swiss government has said it is temporarily freezing any assets in Swiss banks that could be linked to Mubarak.

Believed to have flown to the Red Sea resort of Sharm el-Sheikh, much of Mubarak’s wealth were from investment deals in British and Swiss banks or tied up in upmarket real estate in London, New York, Los Angeles and expensive tracts of the Red Sea coast, not to mention commissions from arm deals. Mubarak’s half-Welsh wife, Suzanne and their sons, Gamal and Alaa, accumulated wealth through partnerships with foreign investors and companies. Mubarak’s wife’s fortune alone was estimated at about US$5 billion.

Regardless whether Mubarak’s wealth is US$40 billion, US$70 billion or more, the fact remains that tracking the money trail would be almost impossible,let alone claiming it back to the people of Egypt. If the Philippine government couldn’t even bring back billions of dollars plundered by former dictator Marcos more than 20 years after his death, what more can the new government of Egypt do to recover it with today’s information technology? 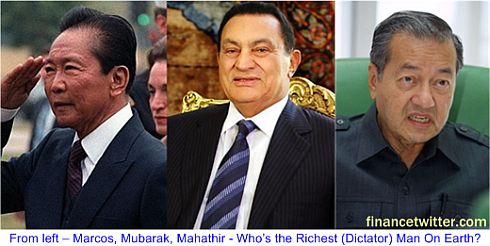 Obviously top army officials were on Mubarak’s payroll judging from his ease of exit from the country. Mubarak may no be the President of Egypt anymore but his tentacles are still in the country. His worry is not about money but more on possible prosecution or assassination. But if you think Hosni Mubarak is the richest man on earth, wait till you hear what has former dictator Mahathir Mohamad plundered. How about US$100 billion?

Using the same rule of thumb that Mubarak “earned” about US1 billion to US2 billion annually, Mahathir’s wealth easily top US$22 to US$44 billion over his 22-year of iron-fist rule. However Malaysia has more natural resources than Egypt and economically, Malaysia is richer although not necessary less corrupted than Egypt. Just like Egypt, corruption in Malaysia is so entrenched that every institutions are tainted – from the monarchy, judiciary, executive, legislature to the lowest ranking policemen on the street. Hence Mahathir is easily worth more than that.

If there’s one factor that is separating Malaysia from Egypt, that’s unemployment. The present government of Malaysia may be more corrupt than previous Mubarak’s administration but Malaysia’s ruling party is smart enough to generate jobs in various government departments especially to cater for the ethnic-Malay, though the jobs created are not needed. If there’s one group that would take to the street just like the Egypt uprising, it would be the ethnic-Malay themselves. 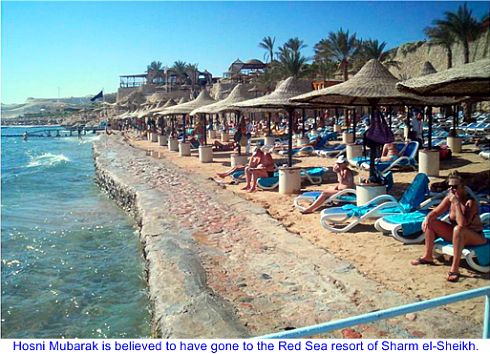 As long as the Malaysia government can provide them with jobs, the scale of demonstration seen in Egypt would not happen in Malaysia. And as long as PM Najib Razak and his mentor Mahathir Mohamad can keep the pace in feeding these mouths and play the racial cards in their “divide and rule” doctrine,they can rule the country for many more decades and in the process continue to plunder the country.

By the time they’re ousted from the country the same way as Marcos and Mubarak, provided there would be an uprising of the same scale as Egypt in the first place, Mahathir and his followers could easily become the richest man on earth. And if there’s an uprising in Malaysia, do not expect any friendly police or military men in sympathy of the demonstrators. Again, Malaysia is very different from Egypt so an uprising of such stamina and scale is very distant.

Who give Malaysia a bad name and act treason to the country? Mahathir Kutty (Corruption and Racism.)