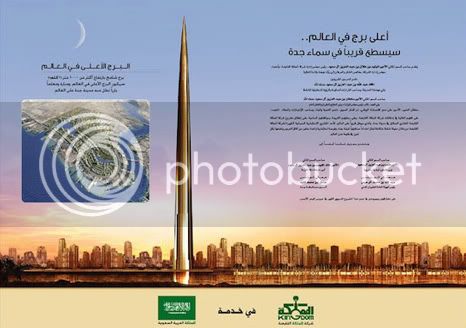 Mile-High Tower AKA Kingdom Tower will be located in an area of ??23 million m2 with a total cost of about 26.6 billion dollars and which has a 5 star hotel, apartments and malls and can accommodate 80,000 people.

Want to know how long it takes for the elevator to reach the highest floor? It took about 12 minutes.

Btw, this project has been started since 2008 but it still seemed new was stopped and will starting build again.

The proposed tower, which will rise more than 1,000 metres and take just over five years to complete, is the centrepiece of the planned Kingdom City development being built outside Jeddah by Prince Alwaleed's Kingdom Holding.

"Building this tower in Jeddah sends a financial and economic message that should not be ignored," Prince Alwaleed told reporters. "It has a political depth to it to tell the world that we Saudis invest in our country despite what is happening around us from events, turmoil and revolutions even."

When completed, the tower would replace Dubai's 828-meter Burj Khalifa as the tallest tower in the world. The Burj Khalifa was built by Emaar Properties for a total cost of $US1.5 billion ($1.4 billion).

The Jeddah tower, which is to include a hotel, serviced apartments, luxury condominiums and offices, will be designed by US architecture firm Adrian Smith + Gordon Gill.

Prince Alwaleed, a nephew of Saudi King Abdullah, said the Jeddah tower would eventually top 1,000 meters, but the final height is a closely guarded secret.

Kingdom Holding shares were up 2.55 per cent on the Saudi bourse at 1255 GMT.

Kingdom said a 33.35-per cent-owned associate firm, Jeddah Economic Co, had been set up to build the tower. Abrar International Holding Co. will also have a 33.35-per cent stake, while Bin Laden Group will have 16.63 per cent, and businessman Abdurrahman Sharbatly will own 16.67 per cent.

Last month, Kingdom, which holds stakes in companies such as Citigroup, reported a 21-per cent rise in second-quarter net profit helped by higher income from its investments.

Saudi Arabia is currently undergoing multi-billion dollar projects to improve its infrastructure, spending over $US400 billion in the five years to 2013 and rolling out three consecutive record budgets along the way, in addition to over $US130 million in social spending.

Jeddah, the country's second largest city of around four million residents, has long complained of neglect.

Flash floods that swept through the city earlier this year are said to have damaged 90 per cent of its roads and more than 27,000 buildings, which residents complain were poorly constructed.

"This will be a transformational project in Jeddah. It will be a source of pride for Saudi Arabia. Jeddah is in great need for it now," Prince Alwaleed said.

The Kingdom Tower and Kingdom City, estimated to cost 75 billion riyals and to take around 10 years to complete, are among other projects to transform Jeddah into a city with high rise buildings to rival Dubai.

Saudi Arabia faces massive housing demand, due to a rapidly growing population. But its nationals have a preference for villas over apartments. Prices for villas have jumped by over 20 per cent in the first half of the year, according to a report by Banque Saudi Fransi.

About 1.65 million new homes are needed by 2015 to meet growing demand in the world's largest oil exporter, Saudi Fransi said in March.

Prince Alwaleed also said that within the next few weeks or months he plans to announce plans for another real estate project in Riyadh, spanning an area of 20 million square meters.

How many lives would be lost if tragedy were to strike at all the tallest to tallest buildings in the world? Especially when there is no thought given to typhoon, flooding and earthquake.

Mind you another possibility is the end of the world in 2012.